A day in the (Belarusian) museum 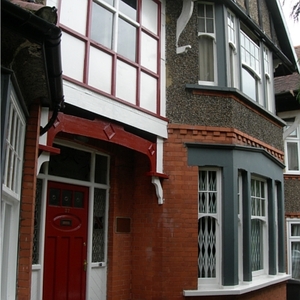 Often the most surprising places are right under your nose. Living in North London, I thought I knew where all the local museums were, including Barnet Museum, which is presently facing closure due to funding cuts.

But while researching an article on Belarus, I discovered there was in fact a museum within walking distance of where I live. The Francis Skaryna Belarusian Library and Museum has in fact been based in its large, old fashioned house since 1971, and contains a wide array of artefacts and books pertaining to the former Soviet Republic.

Intrigued, I decided to see when the opening times were and found the museum is only available for viewings by appointment, so last Sunday I rang up. The man who answered that call was the museum's director, one Alexander Nadson, but more on him later. He said it wasn't possible to come that day (not least because he is still a working Catholic priest, of the Byzantine Greek rite) but we agreed to visit the following Saturday.

Naturally, it nearly all went horribly wrong. My ride nearly crashed, we got lost and only then realised the museum was just around the corner from the tube station I use every day. Then we had to find somewhere to park...

Eventually, we started in a large room on the ground floor, next to the main library. Father Nadson, who is also a senior figure in the Belarusian Diaspora and the Apostolic Visitor to Belarusian Catholics abroad, was rather bemused that two non-Belarusians wanted to look around.

He was almost apologetic for most of the books being in a language we couldn't read - though, as he said dryly, he had plenty of practice himself. Some of the books on the table were of traditional Belarusian architecture. A new Belarusian Catholic church is hopefully being built over the road and the project's architect wanted to get the look right.

Given that we weren't too well versed in the Cyrillic alphabet (which Belarussian shares with Ukranian, Bulgarian, Serbian and - of course - Russian), Father Nadson showed us a pre-1920s five language dictionary from Germany, which translated German words into languages such as Yiddish and Polish, as well as Belarusian.

He also showed us some of the English-Belarusian dictionaries in the collection and a French text discussing Belarusian grammar. The main library itself is full of books covering Belarus' literary, cultural and historical heritage, though obviously may require some work in understanding them.

After that, we had a look at the press archives. The museum has newspapers dating back decades, into the Soviet era and earlier - a treasure trove for journalism and history researchers wanting to study media in the former Soviet Union. We also had a look at collected volumes of the official Belarusian Communist Party youth magazine.

Apart from some beautiful black and white illustrations, the mag seemed dreadfully staid and plain, albeit illuminated with lovely Cyrillic script. Apart from miserable-looking official photos, it seemed to consist mainly of poetry. It put Smash Hits into a whole new context.

The second floor houses the official Church records of the mission. It was also where the most museum-like part of the collection is. Here, fabrics and cloth from as early as the 18th century hung pride of place in a cabinet, alongside books from the 15th century, religious iconography (the rest of the building is dotted with these images too) and examples of Belarusian handicraft, like beautiful plates in-lined with straw veneering.

There was also a bill poster from 1911, advertising a play in Minsk, alongside artefacts like the seal of the last Belarusian bishop before 1839 (when Russian occupiers destroyed the Catholic church there and forcibly converted the country to Orthodox Christianity) and ID patches worn by Belarusian forced labourers during the Nazi period. Much of Belarusian history, it seems, has involved its two large German and Russian neighbours, and not in a good way.

On a lighter note, there was also the strange case of the Belarusian stamps. During the 1971 postal strike, enterprising correspondents used these to send letters which were distributed by one of the stand-in operations that took over while the Royal Mail was in hiatus.

After this, we reached the end of the tour. Father Nadson asked us to sign the visitor book just to prove that two non-Belarusians wanted to visit. I gladly signed it, and described the place in the book's comment section as an 'undiscovered gem'. I still do.

The Francis Skaryna Belarusian Library and Museum is open by appointment only and is free to enter. For more details, visit www.skaryna.org