May 1968: the posters that inspired a movement

David Cookney reflects on the visual energy of political posters from May 1968 and finds it difficult to find a medium that more reliably encapsulates a true demonstration of discord and resistance. 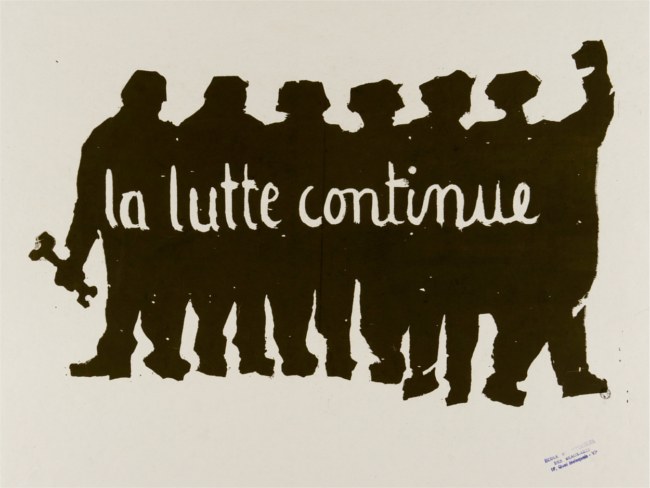 The uprisings that took hold of France in May 1968 provided a blueprint for the kind of widespread social unrest capable of unifying students and factory workers. Beginning with protests over university reform, action escalated quickly to widespread strikes and occupations. The country’s leaders feared an actual revolution could be about to take place.

The movement also produced an important visual language for protest that still resonates half a century later. While often aesthetically crude in design, posters were pasted up in the streets calling for solidarity in the fight against capitalism.

Emanating from the printing room of Paris’ École des Beaux Arts, a group calling itself Atelier Populaire (“Popular Workshop”) subsequently produced the posters. They called them “weapons in the service of the struggle”. This extensive series depicted the tools of the proletariat, including the hammer, the spanner, the paintbrush, and reclaimed them as objects of power rather than subservience.

To create their posters, the group used a production technique – screen print – that was as immediate as the messages they sought to communicate through the work. It harnessed the kind of grass roots energy that is evident in thousands of hastily-produced banners and placards that continue to challenge the status quo around the globe today.

Atelier Populaire’s approach was to work in an egalitarian way. Each print was attributed to the collective rather than the individual designer. Its approach remains a veritable touchstone for those whose work and activism is driven by disillusion and disenfranchisement with the current system – especially those representing organisations which work anonymously to highlight their grievances.

The output is referenced in a huge number of works from protests movements that have taken place since 1968. Its influence is clear throughout high profile exhibitions of political materials such as Disobedient Objects and From Hope to Nope in London and Get With the Action in San Francisco. 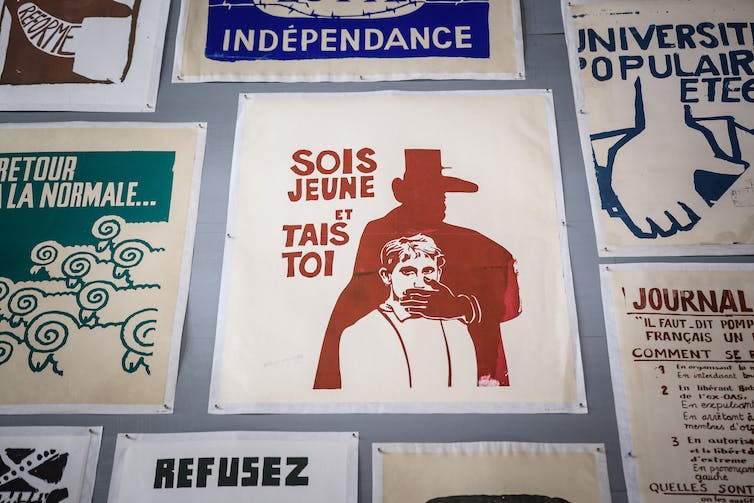 ‘Be young and shut up’: a poster from the movement on display in Paris | EPA

But this reverence really shouldn’t be the case. Atelier Populaire was clear that it did not want its work to be displayed, or even kept for posterity. “The struggle,” it argued, “is of such primary importance.”

However, these political posters – supposedly mere ephemera – retain power well beyond their original intentions. Perhaps that’s because some of the issues they addressed have refused to go away. In 1968, a single-colour print depicting an officer wielding a baton behind a shield emblazoned with a lightning bolt-like “SS”, raised questions about the heavy-handed police response to protests.

But the same is true today. The image still works as a criticism of police brutality and its associations with totalitarianism at a time when campaigners are seeking an official inquiry into the Battle of Orgreave and organisations such as Black Lives Matter highlight cases of police aggression in the US. As one famous design reminds us: “La lutte continue” (the struggle continues).

Still, works on paper may be viewed as a relic from a bygone age. Even in the late-1960s, Atelier Populaire had declared that its posters “should not be taken as the final outcome of an experience, but as an inducement for finding, through contact with the masses, new levels of action both on the cultural and the political plane”. Writing in 2011’s Beauty is in the Street – an essential and comprehensive overview of material by Atelier Populaire – the group’s co-founder Philippe Vermès indeed suggested that “it’d be different now if we ran the same scenario through current times. Twitter and Facebook and cell phones didn’t exist in May ’68”.

Lucienne Roberts, one of the curators of the Hope to Nope exhibition in London, seemingly disagrees that those means of communication necessarily require updating. “I can’t help but think print is the best way to disseminate ideas free of surveillance,” she told me. 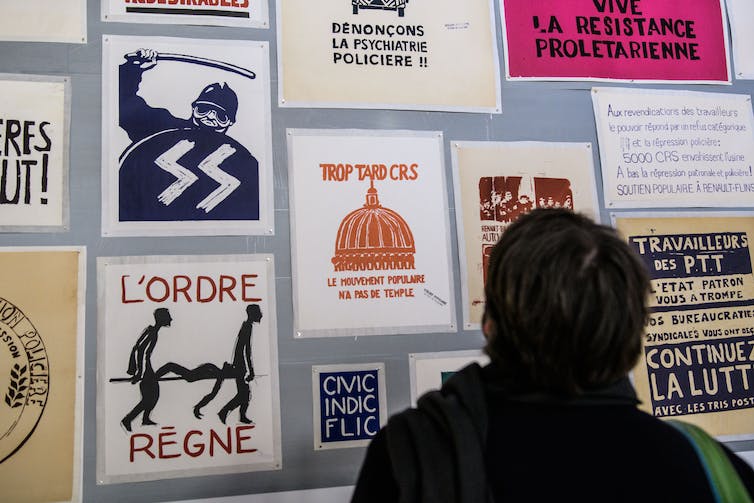 A famous poster from the time depicts a police officer | EPA

And that is an all-important point in 2018. Yes, digital platforms may be seen as having more reach, but as allegations continue to circulate regarding the online tactics of everything from Russian troll farms to data companies such as Cambridge Analytica, it’s not just democracy but also dissent that is in danger of being subverted; hijacked, even. And while a trending hashtag or some anonymous 4chan-sourced meme might then appear to be the bleeding edge of a modern political movement, the lack of transparency and, indeed, physicality offers no indication of the how genuine or widely held any particular affiliation may be.

But 50 years after the ink dried on that very first call for solidarity – “Usines Universités Union” (Factories, Universities, Union) – it’s difficult to find a medium that more reliably encapsulates a true demonstration of discord and resistance than that of the political poster.