The government is making progress towards fulfilling its promise of guaranteeing the rights of EU citizens in the UK after Brexit but mucg work still remains argues Adrienne Yong. 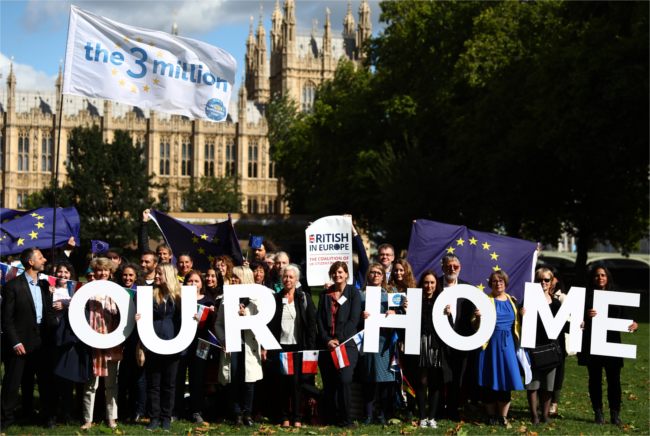 The process for approximately 3.5m EU citizens currently living in the UK to apply for a new “settled status” after Brexit has now become clearer, after the Home Office published details of the scheme. But there are still some issues that EU citizens will need to watch out for.

There are four steps to a successful settlement scheme application:

There are a further three “simple” requirements to satisfy the settlement scheme:

Eligibility looks at whether the EU citizen is a resident in the UK, or if they are actually a family member of an EU citizen. Suitability is a criminal background check to ensure the individual is not a threat to public security.

The official date of withdrawal – March 29, 2019 – is not the deadline for accruing the five years needed for permanent residency. Instead, if EU citizens and their families have been continuously resident in the UK for five years by December 31, 2020 – the end of the Brexit implementation period – then they will be able to apply for settled status. This is equivalent to permanent residency.

Once a person gets settled status, they can be away from the UK for a total of five consecutive years. After this, the status will lapse, so it’s something that needs to be maintained.

The deadline set by the Home Office for all these applications to be made is June 30, 2021, six months after the end of the implementation period. The home secretary, Sajid Javid, promised that “EU citizens and their family members do not need to do anything immediately” because their rights do not change until the end of 2020.

However, those EU citizens who currently have permanent residency or indefinite leave to remain (ILR) are in slightly better positions. They will still have to follow the administrative procedures, but they do not have to pay a fee to exchange their current permanent residency or ILR for settled status. EU citizens who will have been in the country for five years by December 31, 2020 are also in a slightly better position. They automatically avoid the bureaucracy of having to apply twice – once for pre-settled, then again for settled status.

Before the Home Office published details of the scheme, concerns had already been expressed over people who may be at risk of failing to secure the new status, including how to address “grey areas” which often involve the residency status of non-economically active citizens.

The government has also been criticised because the app designed for the settled status application process does not currently work on Apple devices.

In my research on protection of the right to private and family life of EU citizens in the UK post-Brexit, I note some gaps in the Draft Withdrawal Agreement between the UK and EU, published in March 2018. The new document from the Home Office does add some helpful details, especially on how exactly settlement will work.

It resolves the issue of people known as “Surinder Singh” returners: EU nationals and their families who initially left their home member state to exercise their rights to free movement under EU law, and later want to return home. Singh was an Indian national, married to a British national, who lived in Germany. When he moved back to the UK with his wife, the marriage subsequently broke down and he was threatened with deportation but won his case. Such people have now also been guaranteed rights after Brexit. This means if that a non-EU citizen married to a Briton, currently living elsewhere in the EU, were to return to the UK within the scheme’s time limitation, that non-EU citizen would also qualify for settlement.

Still, there are a number of other issues that still haven’t been addressed. The status of people known as “Zambrano” carers – a non-EU citizen who is the primary carer of an EU citizen – is yet to be determined. This includes non-EU parents of EU citizens. Zambrano was a Colombian national with two children who attained Belgian nationality because they were born in Belgium. He was eventually granted residency on the basis that without his care, the children – who were EU citizens – would not be able to remain in the EU.

Another troubling part of the settlement scheme is its provisions on criminality checks. They do not currently comply with EU case law applying Article 28, Directive 2004/38 which protects EU citizens against expulsion. The Court of Justice of the EU states that having a criminal background should not automatically mean someone is a threat to public security – one of the ways deportation can be justified.

Protection from deportation is another missing piece of the puzzle. The Home Office settlement document sets out plans to allow deportation under EU law before the implementation period expires, and for deportation subject to the UK’s Immigration Rules after that. In the past, the UK has not been shy about breaching EU rules on deportations. After the implementation period, it could get worse for EU citizens, as section 32 of the UK Borders Act 2007 will apply to them. This states that subject to some exceptions, a foreign criminal can be automatically deported. What this means is that despite having settled status, EU citizens could still be deported.

There are also questions about the “three simple requirements” for settlement, and how applicants can prove this. Eligibility relies on data taken from Her Majesty’s Revenue and Customs (HMRC) and the Department for Work and Pensions (DWP). This places emphasis on workers, and could make the process more difficult for non-workers, such as the elderly or disabled individuals. Any data held by the HMRC or DWP on these non-workers are more likely to be records of their benefit claims, if any. Given the UK’s stance towards benefit tourism in the past, it’s unclear whether this could have an impact on proving eligibility under the settlement process.

While it is commendable that the UK has made some way towards fulfilling its promise of guaranteeing the rights of EU citizens in the UK after Brexit, it appears there are still some people they are unhappy to keep in their territory after Brexit. It’s unclear what would happen to those who miss the deadline. As these are not minor risks, it’s something Javid and the Home Office should keep thinking about.