When two tribes go to war, and the national press reports accordingly 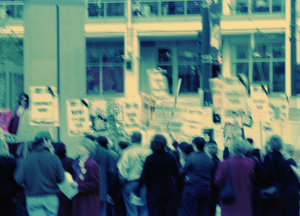 So it's a strike – not quite on par with the General Strike, or even a retro-80s miner vs. bussed-in policeman mismatch. No, this was a day of varying levels of disruption and an often confusing sense of who was winning what. As ever, the media were there to report what happened next.

Starting with the BBC, which provided live coverage of the day's events across the country. Tellingly, one of its updates had Education Secretary Michael Gove subtly offering an olive branch in the form of further negotiations. (Despite Prime Minister David Cameron's hyperbole.)

The Telegraph, meanwhile, provides a typical example of how the day's strikes have been reported by the right-leaning press, with an emphasis on the 90% absence of 999 call handlers, all out on strike. Of course, the government may simply be hyping the absences up, and the remaining 10% are doing a good job, but if this is the case, then they've also demonstrated how over-staffed they are...

While The Independent panics as its star columnist makes quotes up, it still finds time to report that neither unions nor government are in agreement over who's winning or whether the strikes have had any impact, with the former naturally crowing success and the latter inevitably trying to play things down.

The Daily Mail, ever keen to emphasise the dark bits, points out that the riot police are prepared for trouble and that a million very happy children have missed a day of school thanks to striking teachers. Meanwhile, and in no way at all trying to smear by association, the Mail also reports that the anarchist Black Bloc has been rattling its sabre too.

The Guardian has something of a government at bay to report on, as it's admitted over 10,000 schools and a fair few lessons have been closed or cancelled, but is trying to claim that 'only' half of its unionised civil servants going on strike counts as a victory.

Indeed, as The Metro implies, David Cameron has been rather shaken by the affair, if his somewhat impractical call for parents to take their children to work for the day is anything to go by. Meanwhile, he claims industrial action is unnecessary because 'talks are still continuing'. Is that a coded concession, one wonders?

Up in Scotland, they're having the 'biggest strike in a generation', as The Daily Record puts it, which given the size of the Scottish public sector, is quite a big event. Meanwhile, the Welsh are playing host to large numbers of strikers too, including at the DVLA building in Swansea, according to The Western Mail. Northern Ireland seems uniquely spared from mass disruption, though thousands of its own key workers have still gone out on the pickets, as reported by The Belfast Telegraph.

Finally, on the blogosphere, Guido Fawkes reminds us that for all the controversy over public sector pensions, no one is debating the very generous settlements politicians get (one wonders why?), with MPs getting almost three times as much as retired soldiers. Gordon Brown pillaging private pension schemes didn't help either. Guido's that small businesses all go out on 'tax strike' is, however, mad in a king of 'bring us to anarchy' fashion.

Meanwhile, an article on the International Socialist Journal puts today's strikes into another perspective. Union membership has plummeted and the unions themselves have become both unwieldy and bureaucratic. This may be the last major strike of its kind.