Rather useful when the PC stops behaving 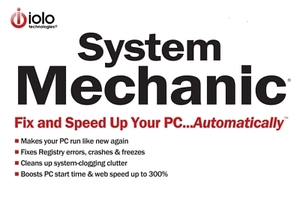 Computers like to go wrong. In fact, they do this so often that an outsider might even guess that it is their main purpose, with the short space of time where they actually work reasonably well being a useful side effect.

As a result, there is a healthy demand for software like iolo's System Mechanic, which purports to be an all-singing, all-dancing answer to your computer's woes.

And the latest edition of this program can certainly make a fair claim to that. It has an excellent suite of tools, allowing you to scan your hard drive, purge it of dead or obsolete files, correct irregularities, improve download speed and more.

In fact, it does indeed work, though my computer already worked rather well, so in my case any improvements were minor, but still noticeable. The PC seemed just a little bit quicker, efficient and less congested after System Mechanic had given it a thorough scanning, and its sundry tools were used to clear away the junk and correct any drive inconsistencies.

The best part, though, is the interface. By illustrating each process with nice, bright graphics, and presenting any problems as a set of objectives for the user to click on and resolve, System Mechanic comes across less as a utility and more as a sort of ersatz computer game.

It's surprising this isn't an idea explored more by the 'serious' end of the computer industry; make utilities fun to use, maybe even give them rewards for using the software often. What System Mechanic does is a step in this direction, making it not only useful, but pleasant to use.

Of course, SM comes with a limited shelf life and you'll need to buy more time in order to be sure of getting updates after the initial three year period. Sometimes the processes also interfere with browsers – in this instance, like Chrome, causing web pages to load up with little or no graphics at all, but that is easily remedied by emptying the browser's cache.

Instead, if you really want to sum up System Mechanic, it would be in one word: Thorough. And given how computers like to misbehave, perhaps also 'essential'.

For more details, go HERE to the main iolo site