A much-hyped exploration of the purpose of art and the gender bias facing women in a society governed by fixed, male-determined rules, leaves Laurence Green feeling cold towards it. 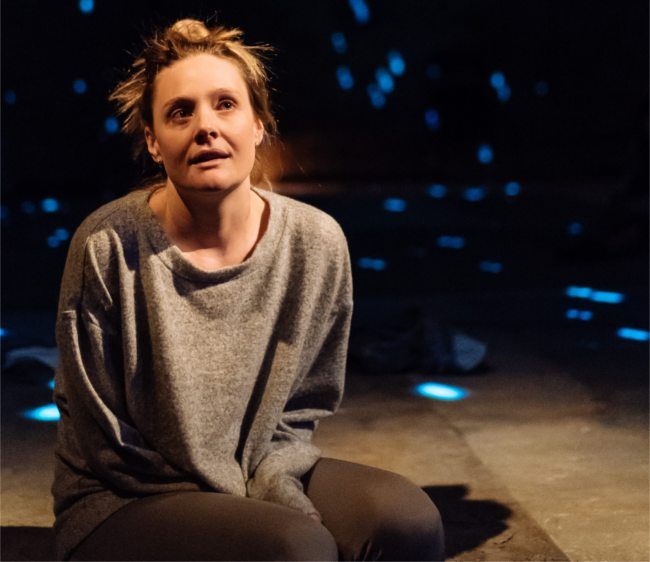 I had high hopes for Ella Hickson's new play The Writer (Almeida Theatre) after its enthusiastic critical response, but sadly it fell far short of expectations.

The play as its title suggests is  about a writer - or rather the writer who is a woman, and is trying to express her need to make theatre a sacred thing, something that matters, not just to her but to society at large, and what theatre should and could be, as well as about the patriarchal nature of the theatre business. It is incredibly knowing, yet also open to its own contradictions.

The drama opens explosively. A young woman (Lara Rossi) emerges from the audience to collect a bag she left behind. She is confronted by a man (Sam West) who asks her what she thought of the play they have both just seen and which - it turns out - he has directed. Her furious denunciation of its commercial and pointless nature points angrily to many tropes women writers and viewers despise so much in the theatre - "the old men saying fascinating things about time and history while women in hot pants lean over desks", the rape added for theatrical effect. The woman then reveals that the man had once made a pass at her, just after he praised her first play, which made her doubt her true abilities.

Then everything changes and we find ourselves plunged into an awkward question and answer session and realise we have just witnessed a reading of a scene written by another writer (Romola Garai), who is nervously presenting it for the first time and being subtly undermined by her own director (Michael Gould). Things get even more complicated from that points onwards and include the arrival of a live baby who is not the writer's but "belongs to a woman in the wings"!

Hickson here attempts to explore the purpose of art, the nature of gender, money versus art and the need for the mythic in a society governed by fixed, male-determined rules. But, although some might consider it an impassioned play, it is a confused one and its ideas dissipate under a weight of pretention and a surfeit of swear words which only serve to alienate us from the drama and its characters. Furthermore, it seems only half-formed, lacking a coherent structure.

Performances under the direction of Blanche McIntyre, though, are good, particularly Romola Garai, whose great cries for freedom, for blood, for the truth in her encounters with passive-aggressive directors and lovers strike a nerve.

But I'm afraid as a piece of theatre, this left me cold.

Runs until Saturday 26 May 2018 at the Almeida Theatre.