Stately and slow-paced first half inhibits Doris Hare's play about a monumental folly that became a temple of opera on the Sussex Downs. Laurence Green reviews. 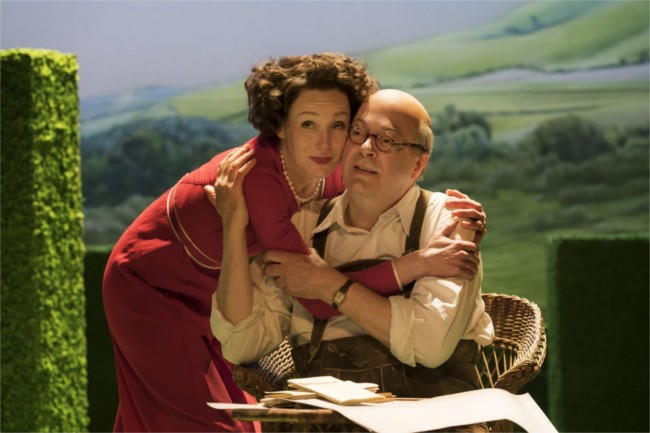 The personal and the political are fused together in Doris Hare's new play The Moderate Soprano, first seen at the Hampstead Theatre and now in the West End at the Duke of York's Theatre, which is based on fact and described as 'Glyndebourne's original love story'.

The two great passions in John Christie's life were opera and a beautiful young soprano Audrey Mildmay, with whom he was completely smitten. Together with his formidable drive, they fuelled what many first saw as a monumental folly in the South Downs. Glyndebourne was triumphantly born amidst stiff Manhattans, rolling lawns and the sound of sheep. It was to become revered the world over.

Such was the scale of the enterprise that love alone was not enough. When a famous violinist was fogged in overnight in Eastbourne, Christie first heard of a group of refugees for whom life in Nazi Germany had become impossible. Perhaps they could help deliver Christie's vision of the sublime, that is assuming of course they would be willing to cast Audrey as the leading light.

This is a play about devotion, self-sacrifice and the way something important, valuable and enduring can be snatched from the jaws of probable disaster. It is on one level a portrait of a marriage and a snapshot of turning-points from 1934 to 1962 and on another level the story of one man's passion to bring proper opera to Sussex. In yet another way, it looks at the way music can control and shape lives as well as providing a meditation on friendship and business.

Jeremy Hermin's production has a static, stately and slow-paced first half, lacking in dramatic impetus. It's not the best introduction to what is essentially a fascinating story but after the interval the drama gathers momentum as we become more emotionally involved, although I was rather disappointed that the piece offers little in the way of musical thrills, apart from a blast of The Marriage of Figaro, Glyndebourne's inaugural production!

The production, however, is bolstered by an engaging central performance by Roger Allam as the wealthy, no-nonsense landowner John Christie, who puts his stately home on the map and created a world-class temple to opera. Allam manages to capture Christie's extraordinary mix of shrewdness, obduracy and visionary zeal. There's also lovely work from Nancy Carroll as the eponymous soprano Audrey Mildmay, who acts as a peacemaker for her spouse encouraging his boldness and reining in his brashness. Fine support is given by Paul Jesson as the conductor Dr Fritz Busch, Anthony Calf as the actor-turned-director Professor Carl Ebert and Jack Fortune-Lloyd as the suave administrator Rudolf Bing who went onto found the Edinburgh International Festival.

You don't have to be an opera fan to appreciate this look at man's fulfilment of a cherished artistic dream.

Runs until Saturday 30 June 2018 at the Duke of York's Theatre, London.