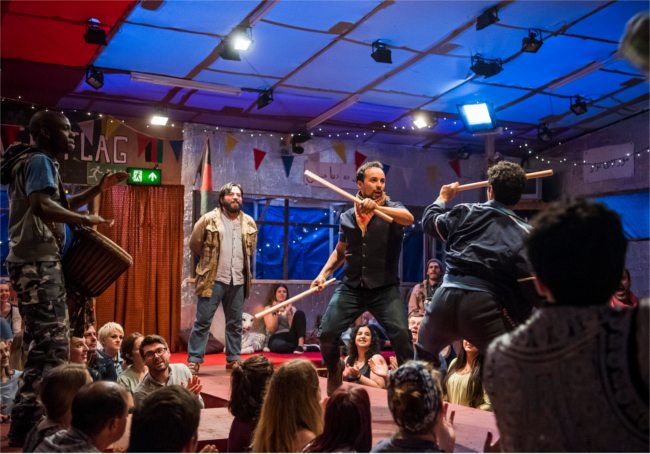 A Patchwork of the dispossessed is how you could describe Joe Murphy and Joe Robertson's urgent docu-drama, The Jungle (Playhouse Theatre), directed by Stephen Daldry, which is an amalgamation of their experiences in the notorious migrant camp in Calais.

This is the story of the Jungle refugee camp in Calais which exploded into the news in 2015. It is not the definitive story of the camp but a series of revealing snapshots which are both challenging and uncomfortable to watch. The main focus is a makeshift Afghan restaurant, where different nationalities jostle and shout. Some 5497 people live side by side sometimes fractiously, on a site by a motorway with cars passing by. Whenever the traffic clogs up the refugees race to play "Douga" - an attempt to stowaway in a vehicle bound for the UK. It is dangerous but the refugees are willing to risk their lives to find safety and at the beginning of the play the body of a teenage boy is brought in from the road after making a fatal attempt tto get away. With the refugees are a group of bedraggled British volunteers, trying to help in an impossible situation.

As a piece of drama, it is tense and moving but also one-sided with Theresa May and the French police seen as "the villains". It is also a play that pulls in different directions providing no easy solutions. To put down roots in Calais and improve conditions would be to admit defeat.

Miriam Buether's design vividly recreates the multi-national migrant camp. The runaway stage is flanked by counters of the restaurant and the set itself is divided into different country regions from Iran to Eritrea. Sniff the air and it is a spice market. Feel the dirt under your feet. And as the actor stomp along elevated plywood walkways, there is a sense of community bristling with energy, anger and resilient humanity.

The first half is mainly extended scene-setting but then the drama really takes wing and we learn more about the plight of the refugees. Told through the voice of Safi (Ammar Haj Ahmad), a Syrian refugee from Aleppo and student of English Literature and Languages, The Jungle navigates the transitions and transformation the camp undergoes from being a transitory space to a permanent home for many. Amongst the most compelling characters are cranky chef Salar (Ben Turner), teenage Okot (John Pfumojena), a tormented refugee from Darfur who is physically and mentally scarred by all he's undergone and Ali (Rachid Sabitri), a drug trafficker who hands his charges an onion to keep dogs at bay. Of the Brits, Rachel Redford is a painfully callous teacher as Beth, Alex Lawther is a wet-eared Sam, just out of Eton, who treats the whole thing as a conundrum to be solved, Joe McInnes is pragmatic and jaded as Paula and Dominic Rowan is over-idealistic as Derek, a man who sees the camp as a chance to start again; a new Jerusalem.

But despite this first rate cast, this tribute to hope and resourcefulness doesn't tell you much you didn't know already.