Come From Away was a sleeper hit across North America, Broadway included, but this adaptation in spite of its charm and energy has perhaps too little to say. 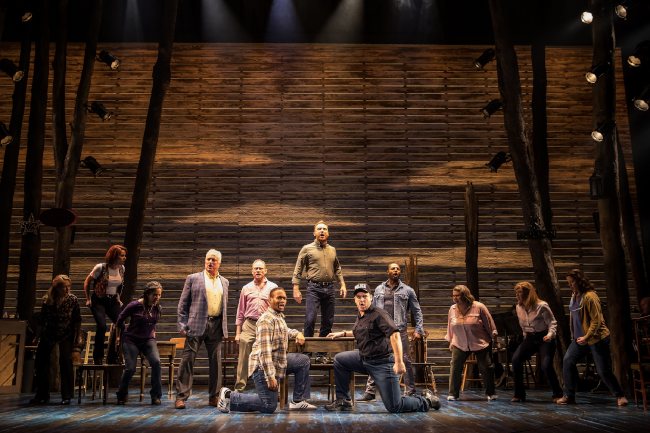 Musicals don't come much more low--key or wholesome than Irene Sankoff and David Hein's Come From Away (Phoenix Theatre), directed by Christopher Ashley, which has been a massive sleeper hit across North America, Broadway included.

It tells the true and touching story of how the Newfoundland town of Gander embraced 7,000 strangers from all over the world after their planes were diverted there amid the chaos of 9/11. As uneasiness turned into trust and music soared into the night, gratitude grew into friendships between the locals and the stranded travellers who have--in Newfoundland parlance--'come from away', and their stories became a celebration of hope, humanity and unity.

Based closely on interviews with real Newfoundlanders, this is a picture of a community that stretches itself to breaking point to accommodate the new arrivals, like the struggle to rustle up transport at a time when the local bus drivers were on strike and had to be coaxed into crossing the picket lines, or the local animal shelter worker who battles to rescue a furry cargo from the planes' holds including cats, dogs and a pregnant bonobo ape.

In Ashley's nimble production, a cast of 12 switch between playing the locals and the stranded travellers. It's an approach that heightens the sense of the group's happily merging, although on the downside this is a musical devoid of a strong narrative and whose characters appear as snapshots, vignettes, rather than fully rounded characters. Among the individuals who make the biggest impression are a gauche British oilman (Robert Hands), the proud pilot (Rachel Tucker), reflecting on how her soar-away career path has become tainted by association, a gay couple who bicker entertainingly, a female schoolteacher (the moving Cat Simmons), fretting about her son fighting fires in Manhattan, and an Egyptian chef who is bemused by local enthusiasm for cod recipes.

The folk-tinged songs are mostly choral and joyous and have a glowing warmth, while helping to keep the show jogging along at a steady pace.

For all its appeal, though, there are moments when the show feels like an advertisement for the Canadian Tourist Board. It also says little--perhaps too little--about the tragic events that convulsed New York on and after 9/11.

But in the end its defining features are charm, energy and a real generosity of spirit, and we are left with the nagging question: in a situation like the one the people of Gander faced, would we do the same?

Runs at the Phoenix Theatre until Saturday14 September 2019.