Despite the best efforts of its cast to inject some much-needed conviction into the show, this abstract production of Brian Freil's 1989 play Aristocrats lacks any sense of consequence or emotional clout and ultimately falls flat writes Laurence Green. 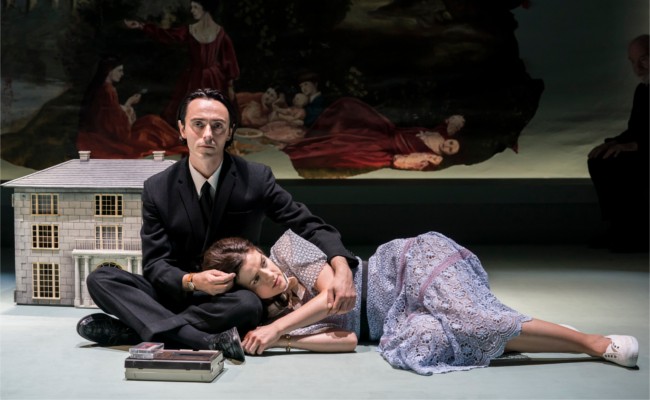 I had high hopes following the National’s superlative recent staging of Translations that Lyndsey Turner’s new production of Brian Friel’s 1989 play Aristocrats (Donmar Warehouse) would match up, but sadly it proved a major disappointment.

The setting is the faded grandeur of Ballybeg Hall which once played host to grand balls, musical evenings and tennis parties and where the O’Donnel family have gathered for a family wedding. There are three sisters present and one brother, and all are unhappy in some way, trapped by a past in which they were a family that lived in total isolation in a gaunt Georgian house on top of a hill. The nature of their history is unclear. An American historian who is writing a thesis on the role of Catholic aristocrats is also present and his questioning reveals not only the O’Donnells’ anomalous position but also the way they seem to be clinging to a vision of life they never led, dreaming of a home that is illusory. The odd brother, Casimir, who has come from Hamburg, full of talk of his almost certainly fictional family and who born after Yeats died, remembers Yeats sitting in the hall and his grandfather hearing Chopin play the piano.

Against this imagined past stands today’s grim reality. They have no money, the house is crumbling, their uncle flits around like a ghost and their father is upstairs dying, his disembodied voice emanating from a baby monitor, confused but still exercising control over the children below. Another disembodied voice – that of the fourth sister, Anna, sending a message from the African convent to which she vanished 20 years before, however, precipitates a crisis.

This is a slow moving, inconsequential play that seems to be straining for effect, consciously and unwisely evoking comparisons with Chekhov. Perhaps to combat this tendency, director Lyndsey Turner has decided to use an anti-naturalistic approach, so abstract that it drains the emotion and humour out of the play, with the result that it appears very arty and self-conscious.

Designer Es Devlin sets the drama in an abstract blue box with a back wall on which a historical painting gradually appears. But the biggest mistake is to have the mansion represented by a dolls’ house, full of miniatures which is distancing and only adds to the feeling of heightened unreality.

The cast do much to inject a sense of conviction into their characters with the best performances coming from Aisling Loftus’ mentally fragile, piano-playing Claire, fending off the reality of her forthcoming marriage with an imaginary game of croquet with the well-off local handyman, Elaine Cassidy as the alcoholic sister Alice who has returned from London, David Dawson all restless hands and eyes as the fey Casimir  and Eileen Walsh as Judith, the level-headed sibling who has remained to care for their senile father, a former judge.

But I found it difficult to empathise with – or for that matter care – about these people and the predicaments they find themselves in.

Plays at the Donmar Warehouse until September 22nd