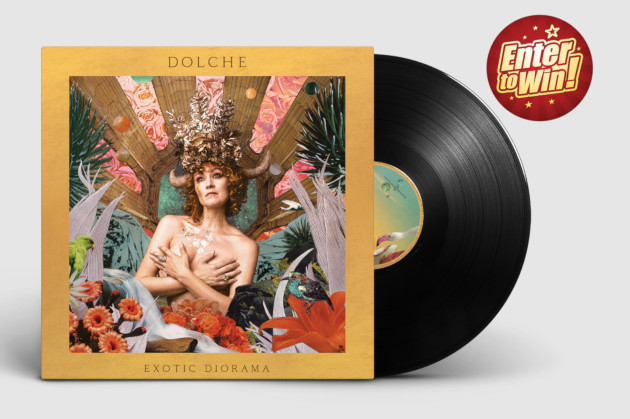 Christine Herin, aka stage name Dolche, is a world-acclaimed Italian-French singer, songwriter, composer, record producer and staunch LGBTQ+ activist, whose musical career boasts five albums and more than five hundred concerts around Europe. She was born in a tiny secluded village of forty inhabitants among the heights of the Alps and is now based in the beautiful cosmopolitan city of Rome. Dolche is a prolific artist who takes aspects of her cultural heritage and weaves in some special magic of her own. Her work comprises of atypical and richly unique collections of sounds and images that transcend the constraints of ‘genre’ and include folk, chanson française, world music, classical music, funk, electronic and more. Her forthcoming album is the aptly titled ‘Exotic Diorama’, out now.

The title of the album ‘Exotic Diorama’ was inspired by the many dioramas displayed in the National Museum of Natural History, in New York, which Dolche has often visited. And indeed, each track of the album is a self-contained world, featuring entirely different musical influences and atmospheres, based on the same idea as a diorama, the artificial and three-dimensional reconstruction of a faraway landscape that gives viewers the impression of actually being there. The singles from the album are such ‘dioramas’, each of which demonstrate the depth and breadth of her unique musical prowess, imagination, emotional resonance and often political insight too, questioning the current socio-political zeitgeist and appealing to our collective humanity. The themes are underscored by creative, visually ethereal, videos cleverly thought out to reflect the messages of each song: the emotional tale of liberation from an abusive relationship in ‘Sunday Mood’, the melancholic stillness of the city (especially poignant, with reference to Covid Lockdown) in ‘Roma’, the power and importance of diversity and common humanity in ‘Big Man’, the sentimental, romantic tenderness of ‘Criminal Love’ and the dreamy and surprising appeal to humanity to take in’ the moment’ with ‘Breathe In’.  There is also the chilling and unique new take on the Talking Heads classic ’Psycho Killer’ , the dark craziness of love with ‘Supernova’, the simple charm of love ballad ‘Canzone d’Amore’, and so much more…

Dolche is playfully and purposefully sophisticated in her work and ‘Exotic Diorama’ is the beautiful, theatrical culmination of her observations and feelings. More than that, she sees the album has having a life entirely of its own, and one that will inspire and evoke new thoughts and feelings in others.

For your chance to win 1 of 2 copies of Dolche ‘Exotic Diorama’ Vinyl Album; simply answer the question below: