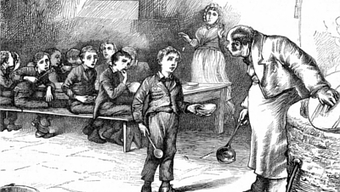 As Iain Duncan Smith denounces worklessness as a 'sin', the thorny issue of politics and morals surfaces again.

Iain Duncan Smith is on a crusade. The Secretary of State for Work and Pensions yesterday declared those on the dole who turn down jobs as guilty of "sin" and that "We want the unemployed to see the opportunities of work."

There is much that can be read into this. Firstly, sin is always a difficult issue because it's usually what someone else is doing, rather than you the accuser. It was certainly used as a means for the Church to control its congregations during the Middle Ages. You did what you were told or you went to hell.

This evolved, by the 19th century, into a division of 'deserving poor' and the 'undeserving poor' - an amorphous social blob of the underclass that was guilty of whatever it was that polite society was afraid of. Usually, this involved sloth, sex, booze and criminality. But most of all, it was not knowing your place: The worst sin of all.

Even now the idea sticks firmly in the public imagination. When the Daily Mail reports about hordes of swan-eating Polish single parent immigrants leeching off the state, it's ranting on about the same old 'underserving poor'.They are selling the fear of those who won't be controlled.

What IDS means, therefore, is that it is immoral to not do what you're told, not to follow the rules and not to take what you're given and be grateful. Coming from a well-off politician, this is rich enough. But when he preaches that he would "have taken any job" when he was unemployed, he enters full brazen cheek mode.

After all, not all jobs are created equal. If you are going to force people into work, then you have to consider what it is you're making them do. Not everyone can be a doctor, a plumber or even a journalist. It's not just training, but a mindset that's needed. The problem is that there's a myth that anyone can do low paid work, when in fact it's every bit as demanding in its own way.

Stacking shelves, picking up dog faeces and rubbish in a park or lifting and carrying things in a warehouse requires both strength of body and a very thick skin. It is, of course, insulting to view such work as something anyone can do, not least to the people for whom it represents their livelihood.

Snobbery aside, this is the point IDS misses. There are some jobs no one should be forced to do - and unless IDS was willing to become a lap dancer, kitten drowner or a psychiatric nurse at Broadmoor during his time on the dole, he has very little room to talk.

The other problem with IDS's make-the-dossers-work ideology is plain and obvious. Apart from jobs that you don't want to do, there are also jobs you can't do. A person in a wheelchair, for instance, is unlikely to find much manual work. And a mother with childcare commitments is hardly truck driver material.

These are extreme examples. But how does IDS propose people with underlying health issues work as labourers, or people with learning difficulties work in administration or people with no computer skills work in e-commerce? There is a finite limit to the jobs any one person can do physically and mentally.

At the other end of the spectrum is being too qualified - why should a building site foreman take on a thin, scrawny Philosophy graduate when he's got Big Kev and Burly Vladek on speedial? Needless to say, the level of graduate unemployment has shot up in recent years. How does IDS propose to hammer so many square shapes into so few round holes?

If you want people to get off the dole or not sign on in the first place, you need to address a range of other problems. Like low wages for often difficult and unpleasant jobs. Or taxes on the low-paid and small businesses. Yet we take a perverse pride in keeping the cost of labour down. It's easier to threaten people instead.

There is something else that's wrong with IDS's stance. Like New Labour, he still thinks that people can be made good. Trying to slap people out of their problems never works though - Workhouses are testimony to that. This measure will too because it will either end in civil unrest or a surge in crime. In the end, one can only allow people to be good if they choose. Money saved on benefits will soon be spent on more prisons instead.

There is a more fundamental issue at stake though. If we are to face the problems facing us, a 'them and us mentality' will simply divide. Class war goes both ways, after all, and while Iain Duncan Smith may mean well, it is good actions and not intentions that are needed here. Casting the first stone is not one of them.