Wheelie Suitcases – a pox on humanity 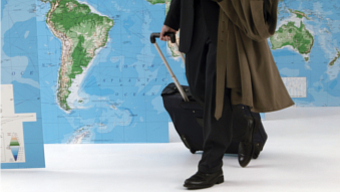 Slow in both body and mind, they make commuting unbearable

You begin to realise a lot of things about yourself and others when you use public transport first thing in the morning. None of it is particularly good. It starts with the looks of envy or smugness that take place between those who get a seat and those who can't.

Then there are the dolts who stand in your way when you're trying to get off or get on. Then there is the stone faced, embittered vibe of early morning commuters, all the truculence thinly veiled beneath a miserablist protestant work ethic.

Don't forget all the pregnant women who wear 'baby on board' badges on the London Underground, complete with LU logos on the front. It's just bragging about your fecundity, which - as Jordan and Kerry Katona amply demonstrate - doesn't actually require that much talent.

Instead you're left to wonder whether the badge indicates some London Transport input (as it were) into the foetus, until it finally emerges, a hideous amalgam of middle class sprog, manky District Line tube train, Mind the Gap narrator and one of those chocolate vending machines they had in the 80s that never, ever worked.

Last week, a pregnant woman, sans badge, asked me if I wouldn't mind giving up my seat. I gladly gave it to her, in part as a reward for originality.

Usually the only interesting denizens of the Tube are the track mice and the buskers who both sustain themselves in much the same way, living off the never-never and the occasional generosity of ungenerous commuters.

The only difference being that the mouse usually doesn't have a MySpace page or a demo CD, and the busker doesn't dive into a hole every time a train comes in.

The worst part of tube travel, though, are the swine with suitcases, in particular - those with wheels on them. There is something about pulling a wheeled suitcase behind you that transforms once decent human beings into adverts for mass depopulation.

The suitcase itself gets in the way in the first place, which is why you should avoid travelling to or from Heathrow on the Piccadilly Line unless you want to get arrested for being rude to hapless Korean exchange students.

But wheels make suitcases truly evil. The puller slows down as the bulky mass behind him getting in everyone's way. Then they get to the escalators, forcing you to stand behind the idiot and his or her case even if you're trying to walk up the escalator to get somewhere on time.

Constantly, the slow clatter and the ponderous, slack beast pulling it will get in your way, even during rush hour, even if you need to be there on time and instead you've got 5 minutes of suitcase dodging to look forward to instead.

They seem to induce the worst in people even outside of tube stations. Recently I found myself in a bus travelling at a slug's crawl owing to three idiots walking in the road directly in front for several minutes. Can you guess what they were pulling behind them? It's enough to make you lose faith in humanity, if the 20th century and 60% of the World Wide Web hadn't done that already.

I have a suitcase with wheels. Once I decided to pull it behind me as I walked out of an airport. Realising how slow I was and how annoying it might be for someone if they needed to get past, I shooked my head, retracted the handle and carried my suitcase instead, able at last to travel at a standard human pace.

But that requires a sense of self and a sense of others around you, and neither qualities are much in evidence at 7.45 in the morning, as the train opens its doors and the beasts of burden board for yet another hour of hard, miserable travel.