Waterloo Is a Competitive Business City for MBA Graduates 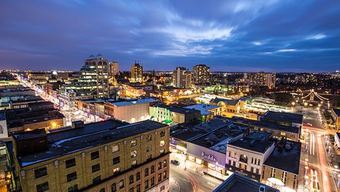 Choosing where to earn your MBA can be a difficult decision that should account for a school’s reputation and faculty, the length of the program, and the tuition fees, which can vary widely between institutions.

Location can be just as important as any of these factors. While an MBA from a recognized business school will be recognized wherever you apply for a job, where you go to school will determine your early professional network and recruitment opportunities.

Among cities in Canada where you can earn an MBA, Waterloo is a diverse, thriving commercial and technology centre where talented new leaders have room to grow, begin their own enterprises, and shape their careers. The one year MBA program offered by the Lazaridis School of Business & Economics allows students to specialize in one of 11 different options including accounting, finance, marketing, supply chain and strategic management, though the school may be best known for offering a specialization in entrepreneurship. Entrepreneurship MBAs are aimed toward providing mentorship and support to candidates with an idea for an enterprise alongside a theoretical and practical business education. Students in every specialization begin the program by taking the Integrated Core, which challenges students to incorporate all eight fundamentals of business theory into their response to real cases.

Over the past decade, Waterloo has become a top destination for startups emerging in the region as well as Silicon Valley companies like NetSuite and Google. Many of the companies that have been leasing out previously empty office and factory space in neighbouring Kitchener’s downtown core have emerged from the startup incubator Communitech. One of the most exciting features of the Lazaridis School of Business &Economics’ entrepreneurship MBA is the opportunity for candidates to build their startup at the Communitech Hub. With the completion of their new Waterloo building, they have also included space for their LaunchPad program, an innovation and entrepreneurship accelerator centre for students and alumni launching their own businesses.

Kitchener-Waterloo has quickly become a top destination in Canada for innovative minds, where exciting new companies find the right conditions to both launch and scale.The growth of the technology sector in both Waterloo Region and Toronto, already Canada’s largest financial centre, has led to closer integration between these two cities’ technology and business communities. Geographic proximity, intersecting demand for talent in similar industries, and improved transit ties mean that companies in both Waterloo and Toronto compete for candidates in the same labour market, drawn from programs like the Lazaridis School of Business & Economics.

According to FDi, Waterloo was ranked second among small cities in the western hemisphere for attracting investment, and the Kitchener-Waterloo area is one of the fastest growing in the country in both population and prosperity. In addition to its growing technology sector, Waterloo also has a well-established financial sector. Insurance firms like Economical Mutual, Farm Mutual and the Equitable Life Insurance Company of Canada were recognized as some of the region’s top employers alongside manufacturing and technology companies like OpenText and Toyota.

Consider earning your MBA in Waterloo and become part of a dynamic and diverse business community that includes technology, finance, and manufacturing, with close ties to companies in Toronto as well as Silicon Valley.