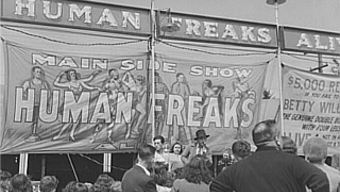 Parody is hard to pull off. All those secretly sycophantic jabs at guest stars on The Simpsons are proof enough of that. But as it turns out, there's no need to parody. At some point or another, the subject will grow so complacent and blasé to its own absurdity that it will become its own caricature, saving you time and effort.

Such is the case for modern 'empowerment' TV documentaries. This, in summary, is where a problem (physical, social, psychological... preferably all three) is identified, dealt with in a 'creative' (or just contrived) way, complete with all sorts of insincere nonsense about 'empowerment'. Charlie Brooker spent much blood and treasure sending it up some time ago. He should have just waited

Lest we forget, at some point or another, the narrator solemnly asks whether 'you've been affected by the issues raised in this program' and if so, a telephone number appears on the screen. You need help, you see. It's for your own good.

(Just pray they don't give you a number to ring during an episode of 'The Walking Dead' or a documentary about Ebola.)

This combination of crypto-freak show and nannying finger wagging has been doing the rounds for years. Some people have built a career on it, while others see it as instant ratings, in particular Channel 4 who arguably have pioneered the format.

And it is now at the height of self-parody. Their latest offering juxtaposes plastic surgery-hungry young women with physically disfigured members of the public - 'Beauty And The Beast' (yes, it's actually called that) claiming to be providing a public service by 'raising serious issues...' Yes, and letting us gawp at the freaks for an hour.

As serious television, it was a non-starter. Everything was staged, timed and edited into a sort of faintly patronising, yet pornographically lurid spectacle.

The most depressing part of the show, however, was when it tried to draw parallels between Yasmin (who spends an hour a day putting the slap on) and Leo (who received terrible injuries in a fire at age 14). Apparently, Yasmin 'needs' plastic surgery because her large breasts attract rude comments from leering priapic young oafs. This is somehow on par with Leo's terrible injuries, and not the media-fuelled insecurities of an over-indulged, spoilt girl from the wealthy environs of Winchester.

The worst part of it is that Leo actually starts swallowing this nonsense, after making the valid point that maybe cosmetic surgery should only be for people who need it. His Damascene Conversion to the cause of poor little rich girls with a quarter of an inch of fake tan trowelled on came about after spending a day tailing his opposite, listening to the low level sexual harassment she receives, apparently because her bust is too big. (As opposed to being too small, or the wrong shape, or not the same size or whatever some women think as they look in the mirror and see only ugliness.)

This moment was rather depressing. Rather than seeing the situation for what it is (a person with real injuries versus a person with low self-esteem), we are invited to buy into the line that we are all victims and all our problems deserve equal levels of consideration. This is absurd - if you treat everyone like a victim then you trivialise those who actually are, like Leo.

Yasmin's real problems are a poor sense of body image and a lack of confidence. What she needs is help and guidance that will make her like herself for herself. Instead, she has a camera pointed at her, rationalising both her self-destructive narcissism and her deep insecurities.

No wonder the show tries to equivalise the two. Otherwise, it might mean it wouldn't have a freak show masquerading as therapy.