Trouble on the home front 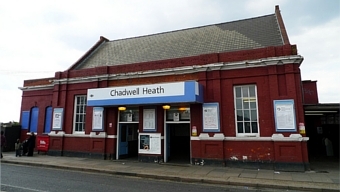 There's more than meets the eye in restive Dagenham

It is always a strange affair to have a story unfold in what used to be your old neighbourhood.

By that, I mean Barking & Dagenham, a sort of run down East London/Essex no-man's-land with more than its fair share of social problems and never-ending rows of council houses (the area is in effect one of the biggest housing estates in the world).

With all its urban blight and a sort of banal, depressed but lairy swagger, Barking & Dagenham is in effect the most Southern outpost of the old industrial north. Once, it benefited from the massive Ford plant, but was left meaningless and decayed in its wake.

And so, like the de-industrialised north, Chadwell Heath has two problems. The first of these is the Far Right. A great deal of hard work has been done in the area by organisations like Searchlight to rally support against the BNP and its creature, the increasingly violent and strident (and secretly neo-fascist) English Defence League.

There are also several ultra-conservative and even Islamist groups operating in the area. Like 'up north', then, Dagenham is a fight waiting to happen. This is seldom reported in the media, however. A rowdy showdown outside Dagenham East tube station between EDL and 'Muslims Against Crusades' was volatile and violent,and ignored: Broadly speaking, Dagenham & Barking is far too unfashionable for anyone to care about it.

Yet problems continue to build up in the area. The latest flashpoint actually happened in the Chadwell Heath area, where I lived in at the time, on Green Lane, a sort of old fashioned high street that's slowly decaying like the rest of the area. A new Muslim community centre is being opened and the EDL dutifully turned up last month for a noisy protest and some fighting. A counter protest by the Muslim community took place last week, and there will almost certainly be more protests and presumably fighting too thereafter.

But here is where some local knowledge comes into play. The site of the new community centre used to be a non-halal butcher, full of many a pork product, and run by a redoubtable old soul called Derek. The sausages and the fruit cheese were top notch, but that sort of old fashioned butcher has been dying a death since the first Tesco's meat counter opened, and there are as Derek admits, few young men who want to go into a skilled, demanding trade like butchery these days. I'll miss the sausages and, indeed, the shop.

Over the road is a Halal butchers and grocery store. It does better business simply because the make-up of the area has changed and it has cornered a niche. Derek wouldn't be selling up if he saw much of a future in the area. In his 60s and with no one to pass the shop onto, he has every right to leave. To an ignorant outsider, it might seem like yet more white flight or an indigenous English business being driven out by immigrants. The truth of the matter is that we just didn't buy enough sausages from him. He wasn't valued until he went.

So off Derek goes, selling his property to the Becontree Heath Islamic Society, kicking off the EDL who don't seem like the sort of people who support local butchers and other businesses or, indeed, work for a living. For all the schlocky Saint George sentimentality, the EDL has nothing to offer but violence and conflict. In that sense, they're on par with their Islamist opponents, who also need conflict and rage to keep themselves going. They have nothing else to offer.

Still, as a former native, I couldn't help but smile at one huge situational irony both sides seem to have missed. The community centre inherits Derek's next door neighbour - a betting shop that does very good business indeed.

I wrote this to my sister

"Our local butcher, and green grocers next door who sold everything has gone and is now a Muslim cultural centre. It's a shame because his sausages were very good, noted in the area. The English Defence league obviously liked his sausages so much that they are currently holding demonstrations every other week outside the cultural centre. If only the Muslims could get over their aversion to pork and open a small pork butchers in the centre, I'm sure the whole thing could be sorted out. It's rather funny to watch because on the whole more police turn up for the demo's than demonstrators. On a more serious note, about a mile up the road they knocked down a beautiful Victorian church and built flats in its place. I feel that if anyone had any sense they could have converted it. It's not unheard of and better than destroying another land mark. As for the rest of green lane, gone are most of the traditional shops and now every other shop is fast food, mostly Halal, Since when was Dixie Chicken Halal, but it is in green lane. The rest are or mobile phone/computer or ethnic hair dresser shops. All we need now is a nail bar but probably if I looked hard enough I would find one. The local cinema went through a metamorphosis converting to a bingo hall, a location for one episode of London's burning and finally an African church. African churches are all the rage as well. Oh and the last big thing is half of the petrol garages have closed and now they are eastern European  car washing  centers. One very last thing, the old Woolworth's is now a cash converters. All we need now is a Bright House to complete the Monopoly board of inner city degradation."

Aside the likes of the EDL I have to defend the ordinary people who on the most part have no problem with new comers, it is only that most people are naturally conservative and resist change. When people get to know each other and abandon the stereotypes people get along fairly well. One of the major problems though is that the communities in  Dagenham don't mix and parallel communities are building up. It is not immigration that has created this problem it is governments lack of control over this situation. The likes of the EDL and the BMP are symptoms of discontent and not the cause. As with all community difficulties they are seldom one sided and often when the situation is studied it mostly boils down to access to resources. Many people in this area find their families scattered for the want of affordable housing and I am sure that even if this simple fact was rectified it would much reduce resentment and thus support for extremists.  It's no good just sending the searchlight to explain to people when they know that they are actually discriminated against on the council housing lists. It is a points system which accounts for need so a single person living in the area all his or her life will never stand a chance of getting housed whereas a family with greater need from outside the area will.   As the current economic problems seem set to continue it is doubtful that anything will be done and we shall continue like this until of course some massive unmissable explosion begins.

I would go further and say that the EDL and outfits like Islam 4 UK and Muslims Against Crusaders are symptoms of a deep, spiritually corrosive urban blight effecting the low income and 'traditional' working classes of all backgrounds.*

It's not white school teachers and Pakistani accountants who are trying to stove each other's heads in, and there are no riots in places like St. Albans.
A shame about Derek's, but even if I could have afforded to buy sausages from him every week, it still wouldn't have been enough.
* Terrorism is and has always been a more middle class phenomenon, meanwhile.

Yes that's the shame of it. As good as Dereks Sausages were they certainly weren't cheep but I guess that's the price you pay for quality.   However, way back in the day we shopped at Derek's  all the time as he sold a very good selection of offal. There simply are no other Butchers selling offal now.

The history of Dagenham and many other of the new towns are much the same in the north and south, most were made for the predominant industry and now many are left bereft of stable well paid work.  This leaves a void into which all kinds of poisons can be pored. For most people in Dagenham the culture was simple and on the whole decent, a house or flat , a job, kids, holiday each year and a party now and again. Up to the 1980's there was always enough housing to allow people to live close to family. Even if that housing was in tower blocks and  was a bit like serving a sentence,  everybody knew that eventually they would get a house with a garden. That's all gone now but not because it had to  but because it was designed to.  Same goes for Fords,  many of the local jobs gone. The film 'Made in Dagenham'  is a hollow celebration and the film avoids the subject of what happened to those women in the end.

To put it in one sentence, I think the indigenous people here have lost heart.

Apathy and stagnation is pretty universal in the area. The only viable alternatives are moving out or the desperate enthusiasm of someone who's still just off the boat and hasn't quite realised how dire their situation is.

I often wonder if Dagenham will end up like those East German cities, largely abandoned and returned to nature, crumbling away with only the beasts to bear witness to its final destruction.