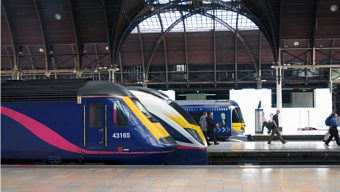 The government is to make a train-wreck of the railways

Governments have two prevailing traits. One is a tendency to be dominated by the biggest gob in the room and not the biggest brain; secondly a complete refusal to let old, bad habits go.

Take the railways. The government certainly has, and to boot, has privatised them (badly), organised and run them (badly) and continues to make decisions that effect passengers (badly).

The latest disaster in the making comes care of Transport secretary, Philip Hammond, who has decided commuters aren't miserable enough and so has decided to 'reform' the system once more.

He rather gives the game away with the claim that all those selfish, spoilt train passengers, who already pay some of the highest ticket prices in Europe for some of the worst train services, can't expect the government to subsidise their travel.

We have been here before with the worn out old claim that since students benefit from degrees, they should pay for them in addition to all the fleecing they endure through income tax. In both cases, they are dressing up divide and conquer with a thick garnish of envy.

It's also a profoundly stupid argument. Millions of people rely on the trains to get to work and can't afford to travel by car. (Unlike Hammond who also didn't have to pay for his degree.)

More to the point, their numbers are growing. 'Subsidising' them means keeping the country and the economy running, much in the same was as how lots of graduates pay off for society as a whole.

Again, the middle classes who make the most use of trains will be hit hard. Hammond explains away the latest rip off in terms of them being "better off anyway", which is relative when you have to cough up over £80 a week for a season ticket. It's another shakedown of the squeezed masses.

Hammond is claiming efficiencies can be made and expenses cut. One can only assume that means even later, even more overcrowded trains as commuters pay ever more for ever less. The McNulty report will, as is often the case with government reports, find itself entirely in agreement with the government, who will then use that as an excuse to slash £1 billion from the yearly subsidy.

Strangely, no one seems to care much about the money being taken out of the system by the rail companies, probably the only long term winners of the rail privatisation.

By 2007, the price of rail travel had doubled since privatisation, but the amount government subsidised (for profit) rail companies by went up four times. British Rail cost both passengers and the government much less.

But in Britain, government is what you do to other people. Hammond knows rail-users won't or can't revolt - they are a captive market. Rather than face up to an inefficient, fragmented system or companies who make money on top of handouts, he attacks those least able to resist. It is both faintly cowardly and ham-fisted, but most likely to succeed.

It's stunning when you actually see the figures.  This is actually Corporate welfare.   As fuel prices rise and more people are forced to make the switch to rail this situation can only get worse. Anybody who has travelled on a rush hour train London will know that the system is overloaded to the point of extreme danger even now. The underground in rush hour is positively traumatic. I used to think that the conservatives were a bunch of hyper functional Dr Evils but now I clear in my own mind that they are a bunch of  stupid, useless, unimaginative twats.    And that of course is not to say anything about New Labour, who before they got in power promised to reverse privatisation then only did so, kicking and screaming when the Railtrack went bust in 2001. The profits of these companies are simply avoidable overheads, gifts to the rich, pathetic.