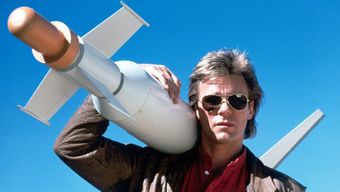 Okay, I will admit it; there are a lot of things I miss about the 80's. I especially miss the simpler times when there was no reality television and a person could simply escape into the creativity of writers and television programming was more limited.

I can remember each family member gathered around the television and having to choose what was on the tube according to what our favorite shows were, sometimes having to take turns because there was no DVR back in the day. Now I am starting to sound like my grandfather telling me stories of having to walk miles to school in the snow because there were no school buses. Be that as it may, here are my top five shows of the 1980's that I truly miss. Let us take a walk down memory lane.

Okay, this show I would wait in anticipation for each week, of course, I was in my early twenties at the time, and I had no children and no real inkling about what direction my life was taking. So I would project into the future with this group of pretty hip and eclectic people, trying to imagine how life might imitate art. Or better yet, trying to imagine if this scenario upon my television screen was a glimpse of how the thirties might be my own coming of age when maybe I would finally be settled and figure everything out. Only in TV land, no one truly figures everything out because the show would be canceled or bore the viewer to tears. It was my version of a more mature soap opera based on real life, kind of like "Friends" but more dramatic. The show's themes focused on family and life's transitions. The cast of this show consisted of Ken Olin, Mel Harris, Melanie Mayron, Timothy Busfield, Patricia Wettig, Peter Horton and Polly Draper.

Who can forget this show? It was a feel-good family comedy about an upper-middle-class African-American family. This show changed the atmosphere of television. Dr. Huxtable was a doctor while his wife was a successful attorney. They shared a loving marriage with four beautiful children. It was a very wholesome and funny show that always entailed a life lesson like the shows of years past. Bill Cosby based this show on his real-life family, bringing his own rare gift for animated humor and fun into the mix. The show was a breath of fresh air and remained at number one in the ratings for 5 years while the show itself was aired for 8 seasons and went out a success. It was funny and heart-warming. The cast of this how consisted of Bill Cosby, Phylicia Rashad, Malcolm Jamal-Warner, Lisa Bonet, Tempest Bledsoe, Sabrina LeBeauf, Keshia Knight Pulliam.

Yes, I indeed had a major crush on MacGyver, starring Richard Dean Anderson. I do not know many women that did not have a crush on Angus MacGyver, although you rarely ever heard him called by his first name. He was a scientific genius, always in situations of having to fight bad guys and evil doers. He could do things with duck tape that would defy logic to most. He was the total package: a nerd, a guy most men could relate to, and with just the right amount of common sense and charisma, he was a modern day superhero without the cape. Women wanted to be rescued by him and most men wanted to be him. This show was a guilty pleasure to watch.

Oh yes, the place "where everybody knows your name". The show almost entirely takes place at a bar where there is a range of characters with diverse personalities. It probably set the stage for "Seinfeld" for the premise revolves around friendships and not much else.The bar was owned and run by Sam Malone, an ex-baseball player played by Ted Danson, Woody Harrelson played the naïve bartender Woody Boyd, Shelly Long played the love interest to Sam, Diane Chambers. Long was later to be replaced by Kirstie Alley, as Rebecca Howe. Dr. Frasier Crane, a neurotic psychiatrist, was one of the regulars at the bar played by Kelsey Grammer. George Wendt played Norm Peterson one of the regulars with a great love for beer. Rhea Perlman as the feisty and opinionated waitress, Bebe Neuwirth as the love interest of Dr. Crane, John Ratzenberger as the know it all postman, Nicholas Colasanto as Coach.This was a comedy for the times where anything or nothing could happen and you would still have a good laugh.

This show was a half-hour comedy based on the lower middle-class working family that struggles to make ends meet and deal with the everyday problems they encounter while raising a family. Roseanne Barr was the star and mastermind behind this storyline based on her own stand-up comedy which she infused in a very clever way into the lives of the show's family. This show also addressed many controversial issues of the time bringing them to the forefront of the viewing audience's perceptions. John Goodman played the father Dan Conner, a lovable, hard-working family man that was a strong complement to his often abrasive, television wife. This family interjected comedy into their lives in order to get through the hard times and come together in love. Roseanne often said things that many others would only think of saying, so they lived vicariously through her on the show.


There were so many great shows on during the 1980's. The writing was professional, actors were into it, and the shows had that special something. Seems just like yesterday doesn't it?