The Origins of the French Revolution 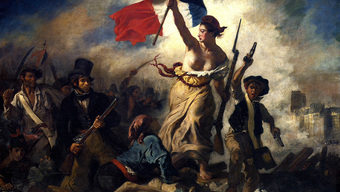 In the late 1700s, France had begun to loan large sums of money to the British colonies in North America in an attempt to help them free themselves from England. When France began supporting the Americans in their war for independence, France hoped that losing the colonies would damage the British Empire and provide itself with a new long-term trading ally in the United States.

What it had not foreseen, however, was the increasingly large debt that only increased when the French government began to pump large sums of money into the American War for Independence. When King Louis XVI came to power in 1774, he inherited the debts of the kings before him and also contributed to it during the American Revolution. France had already had a significant debt prior to the American Revolution due in part to the constant warfare that France had been partaking in, generally religious wars.

Louis XVI was in need to raise funds to pay off his debt, though it was increasingly difficult with the power-hungry nobles. The upper-class citizens were already exempt from many of the taxes that were weakly imposed by the French monarchs, and much of the revenue in the form of direct taxes came from the poor peasants that were already overburdened by debt themselves. France did not have any sort of national banking system to raise money from loans, and in 1789 Louis XVI brought together a national assembly, where representatives of each of the three classes of France, the lower and middle, the nobility, and finally the Roman Catholic clergy. Louis XVI and the other three estates convened because the king hoped to authorize new taxes that would affect even the upper class and help to raise revenue to pay off the national debt.

After a disagreement over the heavy burdens of taxation, with which the French poor were already suffering due to an agricultural hardship, and a disagreement upon representation, the French poor demanded a new French constitution. In 1789, a small revolt began in the national assembly hall, where the poor attacked the guards of the hall. Once other, growing outbursts of violence began around France, the convention attempted to create a new form of political and social constructs much like that of the American Revolution. The National Assembly then declared war on Prussia and Austria to prevent the state of France from withering through the revolution. The lower class Frenchman soon after declared war on Britain and the Netherlands and put King Louis XVI, the queen, and thousands of others through the guillotine in order to finally assume control of France.

This important piece of history is the subject of college classes, as well as high school history classes. We can certainly learn much from it and apply that knowledge in today’s society.