The Oracle Bones and the Continuity of the Chinese Civilization 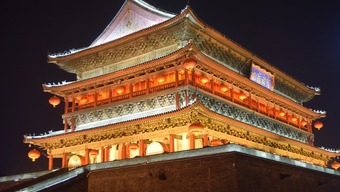 The Chinese civilization may not be the oldest in the world, but it is certainly the longest, lasting continuously for five thousand years until present day. Many factors contribute to its longevity, but the Chinese written language no doubt has a lot to do with it.

Unlike phonetic writing systems where the words are written with alphabets and spelled more or less like how they sound, the Chinese language uses "characters," which are pictorial representations of images or ideas. These characters transcend regional dialectic variance and the changing of times and serve as a unifying force for the Chinese people.

For example, let’s take the word “sun”. Although the pronunciation of the word “sun” has changed over the centuries or may be divergent across different regions, the sun symbol can be easily recognized. So while there are various forms of spoken Chinese, some of which are mutually unintelligible as German vs. Spanish, there is only one form of written Chinese. Try to imagine that all European language-speaking people decided to adopt the same written language, the French can continue to call the sun Soleil, the Spaniard's sol; everyone might not be able to understand each other's speaking language, but all can communicate with each other through the written language.

The earliest known form of Chinese writing dates back 7,000 as symbols on potteries discovered at a Neolithic village near the current day city of Xi'an. A more mature form of Chinese writing appeared 4,800 years ago, carved on a few pieces of wine containers made of clay. However, only a few Chinese characters were discovered on these vessels. By 14th-11th BC, Chinese writings appeared on large quantities of tortoise shells and animal bones, called Oracle Bones, which were used for divination for the royal court on issues such as warfare, disaster, rain, the season and hunting expedition.

When a king needed divine guidance or communication, he would order tortoise shells or cattle bones to be heated. The subsequent cracks that appeared on the shells and bones were thought to contain divine messages. After the king and his priests had interpreted the meaning of those messages, the text of that interpretation, as well as the initial questions posed to supernatural beings, would be carved on the shells and bones. The oracle bone texts also contain some of the world's earliest astronomical records, such as those on comets and lunar eclipses, since, like other ancient people, the Chinese believed heavenly objects and events had a huge influence over life on earth.

The discovery of the oracle bones was purely an accident. In 1899, a famed Chinese scholar was traveling in the Henan Province fell ill. He went to the local pharmacy and was given some "dragon bones" to be ground up as medicine. These "dragon bones" were dug up by local people from nearby fields and were thought to have medicinal if not magical powers.

The scholar noted that there were strange writings carved on the bones, and realized they must be an ancient form of Chinese writing. He immediately started collecting the bones and devoted his life to studying the writings which were later determined to be from the 14th-11th BC, China's Yin dynasty. Archeological excavations in those fields led to the discoveries of ruins of the Yin Capital. Below is a picture of an oracle bone.

Although over the centuries, the cursory and spontaneous style of the oracle bone writing has evolved into a more compact and refined form, the essence of the Chinese writing system has remained intact, contributing to the cohesiveness of the Chinese culture and the Chinese nation over the millennium.

For sure, the route of the triumph is difficult for the persons. The tip of the https://essay-reviewer.com/academized-com-review/ is shared for humans. The content is produced for the future offers. Skills are sharpened for citizens. Their outlook is shared for the tinge of the green for the innovation.

Well, that should be highlighted because these types of topics are able to get in through. BTW, nowadays I am doing some research on these types of topics. I am writing a assignment and for that I am gathering information about the research raper topics which I have got from https://studyclerk.com/research-raper-topics which is an online writing service provides the best research topics also. You can use this website if you are writing something important.

I want to read history about world and this post gave me knowledge about Chinese history. I am also facing a problem in writing a research paper. I want an online writing help and one of my friend suggest me to go for https://www.ihatewritingessays.com/ which proved best writing help for me. It has professional best writers which helped me any time. Here I also got 10 percent discount. This is authenticated site and have high privacy policies. I loved this site deeply.

The post was very useful for me. The information was useful and interesting for me. I read on the site about this. Thanks for the info.

We share our blog. This blog about "How To Choose The Right Microphone For Your Video". If you want to read them then go to the website.

Thank you for sharing such a wonderful article. I like to travel and visit such historical monuments. I have time for this thanks to the best professionals https://essaysleader.com/comic-book-script-format-writing/

I am glad you take pride in what you write. This makes you stand way out from many other writers that push poorly written content. The productivity of the business depends on how quickly the work is done. It is important to develop typing skills to get your work done faster. Typing helps you work comfortably on a computer, it helps you interact with colleagues and customers, create documents and discover new information. So, read my article on topic 5 Reasons Games Are a Great Way to Learn Typing.

Thank you for this site . very informative post, and I love it am a musician and having site about who teach us about How to use Voice recorder. if you want you can check it.

Mouse clicking games are entertaining to play, but at the same time, they demand a high level of stamina, strength, and speed. Players drain most of their energy with short bursts of clicking while playing online mouse clicking games. However, there are alternative ways to automate clicks and save the strength in the fingers. Many gamers use software dubbed as ‘auto clickers’ that can masquerade human mouse clicks.

I love to travel, have been several times to Japan and China, but most of all China has filled my heart. These cities, this culture is just something unreal ... yes, the civilization there is completely different from ours. By the way, I help students and work as a writer, I write essays with super essay writers. We have a great team. Which will help everyone.

I am fascinated by Chinese culture and its exceptional industrial growth.  It has an ancient culture and is the oldest civilization on Earth. I like to travel to China. That's why I found a blog that has good information about the tree hammock, using that we can enjoy our camping.

You have made some decent points there. I looked on the web for additional information about the issue and found most people will go along with your views on this website. Well Shocking, I am glad to share a brilliant post about BSL Shaders 1.14.4 for minecraft. I hope you will really enjoy this shader pack.

A professionally written paper is a good chance to get higher grades and receive substantial advantages for a career search. A perfectly written dissertation usually receives a smaller amount of revisions and higher support during your presentation. The dissertation writers for hire will help each student master their dissertations.