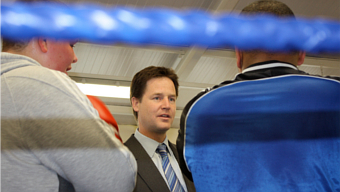 What are the Liberal Democrats actually for these days? As a certain Conservative grandee admitted recently, they’re primarily there to strap to the front of the government juggernaut, absorbing the blunt force trauma and bits of wreckage hurled about like wooly hatted, sandal-wearing ablative armour.

Beyond that, their actual purpose seems questionable now. Are they in favour of personal liberty? Arguably, a Tory government would have binned the more ominous legacies of New Labour, like ID cards, with or without Lib Dem prompting.

Public services? They're getting slashed to the bone. Education? Students will be more restricted by debt now than they were before the apparently student-friendly Lib Dems came to power. Electoral reform? Try to say AV without laughing. Go on. Try.

It's perhaps time to accept that the Liberal Democrats are now just a protest vote party suddenly stripped of the purity of perpetual opposition.

Left leaning voters will now support Labour again, since the dubious Blair/Brown era is over and the party is being lead by someone not contaminated by the Iraq War and the ongoing Afghan conflict. Or perhaps the Green Party, which still retains its idealist sheen.

Old school Liberals and centrists will probably vote Red or even the tiny yet surprisingly lively remnants of the Old Liberals now, seeing that the party they'd invested their hopes in had not so much sold out for thirty pieces of silver as flogged the cow for a handful of magic beans.

Meanwhile, the Lib Dems' free market 'orange bookers' faction, of which party leader, turned Deputy PM, turned running joke Nick Clegg is a member, are simply either Tories in disguise or not able to compete directly with The Real Thing.

So what is the point of the Liberal Democrats? Well, they claim to be reformers, so how did they go about this yesterday? They, err, helped defeat a bill in the Lords that would have allowed local communities to directly elect their Police Commissioners because, apparently, this would give too much power to one individual...

...As opposed to the present system where one individual in Whitehall has power over all the constabularies across the UK, whether the locals like it or not.

Instead, the Lib Dem peers wanted a system where Chief Constables would be appointed by panels consisting of other technocrats. This, apparently, would be more representative.

The game's up and they know it. All those nasty rumours about dirty tricks at election time should have warned us about the party's true face. The latest polls suggest only meltdown and oblivion at the next general election, which last week's local elections served as a sort of preview.

Perhaps we can't blame the Lib Dems entirely for being as they are. A third party in a two party system will primarily focus on surviving and scrabbling for votes. Relatively minor issues like integrity and feasible policies were cast aside.

They are products of a system that punishes political diversity and in making compromises with that system, they have lost whatever chance they may have had to change it. But really, how can anyone feel sorry for them now? The wilderness awaits.