The history of 24 hour news 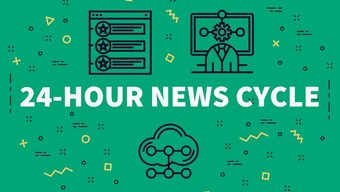 With the rise of technology including smart phones and tablets, along with platforms such as blogs and social media, the 24-hour news cycle is constantly evolving.

Some have argued the new form of easily accessible news and instant updates has caused damage to journalism and its reputation.

So, what exactly is the 24-hour news cycle? And how much of an influence has it had? The team at Adoni Media have put together everything you need to know.

What is the 24-hour news cycle?

As the name suggests, the 24-hour news cycle, otherwise known as 24/7 news cycle, is the 24 hour reporting of news, seven days a week.

A full news cycle typically involves the media reporting on an event, and reporting on the public and their reactions following the event.

The channel strengthened its reputation following its 1991 coverage of the Gulf War, inspiring other channels to follow their lead.

In 1996, Fox News and MSNBC were launched and quickly became competitors of CNN.

Since then, there are 24-hour news channels worldwide in nations including Australia, France, Germany, Pakistan, Russia and more.

Although the style among 24-hour news channels vary, many have followed a format which includes the following:

While some people praise the 24-hour news cycle others have, in the past and present, criticised the format. For example, former journalists Bill Kovach and Tom Rosenstiel released a book in 1999 titled Warp Speed: America in the Age of Mixed Media.

In the book, Kovach and Rosenstiel suggest the press has replaced the traditional values of verification, proportion, relevance, depth and quality of interpretation with sensationalism, entertainment and opinion.

Their main fear was journalists in the future would de-emphasize whether a claim was valid before presenting it to the public and doing so as quickly as possible.

Almost 20 years since the release of their book, some have argued Kovach and Rosenstiel were correct in their claims, and the 24-hour news cycle has killed journalism.