The Fox (News) in the chicken coop 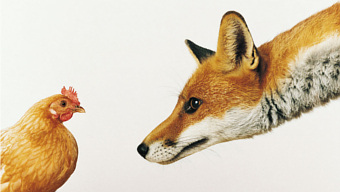 Perhaps it's redundant these days to be rude about Fox News, America's main source of far right propaganda. Still, on reading a little more about its boss, Roger Ailes, it's hard not to be ruder still:

...Fear, in fact, is precisely what Ailes is selling: his network has relentlessly hyped phantom menaces such as the planned "terror mosque" near Ground Zero, inspiring Florida pastor Terry Jones to torch the Qur'an...

...To watch even a day of Fox News – the anger, the bombast, the virulent paranoid streak, the unending appeals to white resentment, the reporting that is held to the same standard of evidence as a political campaign attack ad – is to see a refraction of its founder, one of the most skilled and fearsome operatives in the history of the Republican party...

So in other words, we have a very powerful person whose goal in life is to bring out the very worst in people. He also has an 'impressive' pedigree:

...But it was behind the scenes at Mike Douglas in 1967 that Ailes met the man who would set him on his path as the greatest political operative of his generation: Richard Milhous Nixon...

...The exchange was a defining moment for both men. Nixon became convinced that he had met a boy genius who could market him to the American public. Ailes had fallen hard for his first candidate. He soon abandoned his high-powered job producing Mike Douglas and signed on as Nixon's "executive producer for television". For Ailes, the infatuation was personal – and it is telling that the man who got him into politics would prove to be one of he most paranoid and dirty campaigners in the history of American politics. "I don't know anyone else around that I would have done it for," Ailes has said, "other than Nixon..."

You may remember Nixon - the President who had to resign and could have faced jail for believing that the ends justify the means. His protégée, meanwhile, has some worrying beliefs of his own:

...Ailes then embarked on a purge of existing staffers at Fox News. "There was a litmus test," recalled Joe Peyronnin, whom Ailes displaced

as head of the network. "He was going to figure out who was liberal or conservative when he came in, and try to get rid of the liberals." When Ailes suspected a journalist wasn't far enough to the right for his tastes, he'd spring an accusation: "Why are you a liberal?" If staffers had worked at one of the major news networks, Ailes would force them to defend working at a place such as CBS – which he spat out as "the Communist Broadcast System..."

The real problem, however, is that Ailes is both unaccountable and answerable only to someone whose own power is either slipping away or was never really there in the first place. I refer, of course, to Rupert Murdoch:

...The outsize success of Fox News gives Ailes a free hand to shape the network in his own image. "Murdoch has almost no involvement with it at all," says Michael Wolff, who spent nine months embedded at News Corp researching a biography of the Australian media giant. "People are afraid of Roger. Murdoch is, himself, afraid of Roger....

...Privately, Murdoch is as impressed by Ailes's business savvy as he is dismissive of his extremist politics. "You know Roger is crazy," Murdoch recently told a colleague, shaking his head in disbelief. "He really believes that stuff..."

So we have a powerful, ruthless individual who is paranoid (he thinks Al Qaieda is out to get him) and willing to bend the facts in order to peddle his own 'higher truth'. The irony is that the latter makes him akin to that problematic left wing huckster Michael Moore, who has a similarly elastic view of editorial standards.

And yet the one thing to note about Ailes is not that he runs an impressive propaganda organisation which reaches millions of homes. What's actually wrong is that he is no different from any of the far left demagogues he denounces.

As Lenin knew all too well, in order to win control, you need to control the media, and if there is any organ that parallels the reach and pervasive power of Fox News and its autocratic, narrow-eyed witch-hunt glare, it is Pravda...