The end of Trolling? (And the end of freedom on the Web) 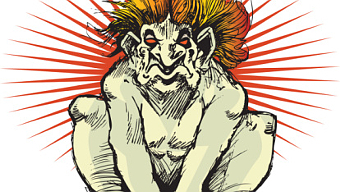 A tradition of online abuse and provocation may be about to bring about its own downfall, with implications for legitimate Web users everywhere

The problem with Trolls (as in, those anonymous, semi-anonymous and - indeed - all too familiar people on the Web who enjoy others' pain) is that they don't know when to stop.

Even when the other participant is squealing with rage or has found out the troll's address and passed it on to their violent uncle and his large, muscular friends, the troll can't resist twisting the knife just a little bit more...

The problem with this is sooner or later, the troll gets caught:
A twisted internet 'troll' who posted vile videos and messages mocking the deaths of teenagers - including a girl who threw herself under a train - was jailed today for 18 weeks.
Sean Duffy, 25, targeted Facebook tribute pages and even posted videos on YouTube taunting the dead and their families.
He hijacked emotional tributes on the internet and, hiding behind his computer screen, posted vile messages that caused the dead teenager's families yet more pain.
Naturally, the all-powerful abuser turns out to be over-compensating for something:
...The court heard that [convicted Troll, Sean] Duffy lived a 'miserable existence' drinking alcohol alone at his home in Reading...
...Duffy's lawyer Lance Whiteford said he could offer no mitigation but that Asperger's and alcohol abuse went some way to explaining why he committed the offences.
Duffy was diagnosed from a young age with Asperger's and had received specialist education because of his condition...
The most disturbing fact about this case, other than Duffy simply deciding to abuse the families of dead children for no reason at all, was that he himself was a victim of bullying and harrassment.
Rather than teaching him empathy for others, however, it seems only to have taught him that power can be had in making others miserable. In that sense, he is en par with sociopaths like Jason Fortuny, who justifies his own cruelty (rooted in similar childhood trauma) with ever more spurious arguments.
This case is significant, however, because it demonstrates that not only is mainstream society becoming increasingly aware of trolling, but is increasingly willing to crack down on it. It may only be a matter of time until internet providers are forced to give up the IP addresses of trolls and sites be obliged to police their content and social media for abusive material.
This will mean a chilling effect on legitimate online discourse and the end of the anonymity that makes the Web so liberating, but which has been utterly abused by the trolls.
Still, as long as the trolls are able to indulge their own revolting behaviour, the rest of the world - it seems - can go hang.
[SOURCE: Daily Mail]