The economy: Lukewarm and febrile 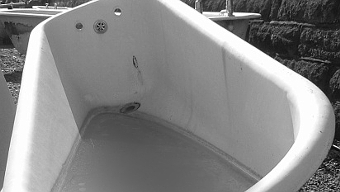 Signs of a recovery are spotted, but remain weak and fragile

Cold baths can be an adventure, or a challenge. But lukewarm baths are proof that life can be a grim experience. Neither warm nor cold, the water sloshes limply around you like a disappointing pond in Limbo.

A similar effect can be gained by keeping an eye on the economic news these days. First, the hot water - which in this case is represented by reports that the UK building industry is going through a small renaissance, with growth of 2.3% in the second quater of this year. Given that construction usually means more investment and so even more jobs, you'd be inclined to feel a little more optimistic.

Or the news that job growth in the United States continues apace - good news that boosted the markets on Wall Street. Are we seeing the very earliest signs of a recovery?

But then the cold bit of the bath makes its presence felt, inducing unease and not a little discomfort. True, unemployment in America is down, but that's still 9.1% of the population out of work, a doubling since 2007. The desperate search for work at jobs fairs by middle aged ex-professionals tells another story of hard times too.

And what about the UK? Our financial sector is undergoing something of a brain drain. Our European neighbours have banned short selling, inspired in part by situations like France being at 0% GDP growth, amidst cuts in consumer spending.

In Britain, house prices are at a 21 year low and future taxpayers will be settled with nigh-on £60k student debts.

What seems apparent then is not a recession in retreat but one where small fluctuations occasionally take place. It's telling that the rally in the stock markets earlier this week were quickly wiped out as trading continued. It will be a while before the hot tap gets turned on again.