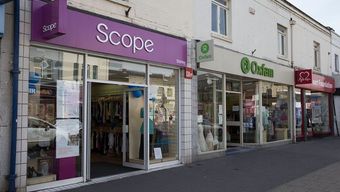 As we are reminded regrettably all too common nowadays, war is brutal force that destroys lives and wrecks families. There are few redeeming features to it, however, from such carnage can sometimes emerge forces for good.

During the Crimean War in the mid-1800s appalling sanitary conditions led to awareness of the need for sterile hospitals and cleanliness amongst doctors and nurses, a development that saved countless lives ever after.

During the 1940s, when the war was taking its toll on resources, the charity shop came into its own and truly blossomed. The first charity shop had been founded in 1899 in the West Midlands. The Wolverhampton Society for the Blind sold wares created by the blind in the area to raise funds for the Society, the goal of which was community support for the blind. In the First World War numerous flea markets, as we might now call them, were held to raise funds for the war effort. A market held in Shepherd’s Market, London for example, managed to raise some £50 000.

In the Second World War, when perhaps the stakes were even higher and the toll on everyone was felt more greatly, charity shops spread across the UK with tremendous speed. Some 200 Red Cross shops alone dotted the landscape with a further 150 temporary locations set up.

Since the war ended the number of charity shops has only increased. The charity shop with the most numerous locations is by far Oxfam. Today they operate more than 700 shops across the UK. This powerhouse of charity shops had humble and rather specific beginnings. The hugely successful The Economist newspaper began life in 1843 as a publication to advocate the repeal of the Corn Laws and has been in print every since and is now one of the most respected names in journalism. So too did Oxfam start out as an issue-specific organisation. When the Allies blockaded Greece during the Second World War, civilians starved. Oxfam, or the Oxford Committee for Famine, was established to petition the UK government to allow shipments of food to reach the besieged country.

Charity shops are not necessarily places one goes simply to buy second-hand goods. In recent years, charity shops and their staff—often volunteers—have organised events to raise funds for the various causes they support.

Despite their rather bleak genesis in times of profound troubles, the concept has spread across the world and become hugely popular. In addition to having competitive prices many people find the concept a good alternative to other retailers. For consumers worried about their carbon footprint or for people who wish to avoid their money going to companies that use sweatshop labour the charity shop provides a socially conscious alternative to other high street locations.

Although the first charity shops began as issue- or organisation-specific places for goods to be sold in order to raise money, the appeal broadened. By now there are a bevy of shops and organisations that are operated by umbrella charities or even religious organisations. With the widespread notion of alms-giving found in different religions it’s not shocking that churches and mosques have opened (and continue to open) shops. The rapidly expanding Penny Appeal, based in Wakefield, even follows a Zakat policy, one of the Five Pillars of Islam.

The Salvation Army, a protestant religious organisation founded in London in the 1830s, is another example of religious belief being married with retail in an effort to alleviate poverty and improve the lives of the impoverished. In traditionally or predominately Catholic countries one is more likely to find Caritas Internationalis, a social service, relief and development organisation operated by the Catholic Church.

In spite of the good that these organisations and their charity shops do, they are not without their problems. Just recently a sign in a Swansea Oxfam shop that went viral showed a pile of Dan Brown’s The da Vinci Code with a note asking donors to give more desirable goods to the shop in order to satisfy customers and to raise more money for the charity.

This problem is not uncommon as charity shops operate almost exclusively on donation. They take in goods such as books (not only one-time best sellers), CDs and vinyls, and most notably clothes. Popular with the frugal and those on lower income, the venues can be a place to find any number of bargains. The Guardians warns in its list of charity shop dos and don’ts that one has to invest time in order to find those gems that one hears rumours about. They even recommend establishing a relationship with staff, who might be willing to save items for a customer who’s been after something specific.

For the shopper, charity shops offer a unique opportunity. What a clothing retailer like H&M or Zara might not choose to stock owing to a lack of demand one might be more likely to find in a second-hand shop. While it may not be the healthiest of attitudes to waltz in, expecting to find vintage Gucci for a fiver, it’s not unfathomable that the dedicated charity shop shopper—sometimes called ‘thrifters’ in the US by virtue of being one who shops at what are there called ‘thrift stores’—comes home with a vintage gold.

In the world of multinational high street retailers, building rapport with staff may seem a quaint harking back to a time that is now a fast fading memory. The goal of the charity shop is exactly that however—not nostalgia, but community. The raison d’être of the institution is to engage people, in whatever way possible, to become active in their community and to help support those who are less fortunate. The concept might have been borne of dire times—be it the fight against the poverty of Victorian London or the war time Britain—but even in times as relatively prosperous and peaceful as today, who could argue against the trifecta of charity, community and shopping?