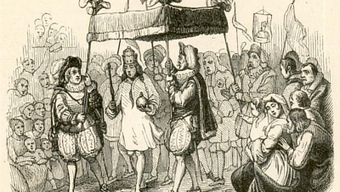 What's in and what's out this season? (Pending bail conditions.)

STEP ONE: The look
Feel like a sheep? Remember, Hitler unt die gruppe had STYLE, but one must retain one's individuality! This season's look is simple and direct - Captain Jack Sparrow meets psychedelic Fagin! The paparazzi will love it as you're lead out the police car in handcuffs!

STEP TWO: The lingo
Are you a wallflower? Always ignored at bars? Be bold! Be strident! Be racist! Always be first to make offensive, provocative comments and have pointless slap fights with complete strangers! Remember, it's all about making the right impression!

STEP THREE: (Man)handling the punters
Meeting your public for the first time? Don't forget to put on a sharp performance, especially if it can be caught on camera! Be careful if your voice is a little slurred or you're a little tipsy. Make sure everything you say can be clearly heard so the jury at your arraignment won't get confused!

STEP FOUR: Stay with the in-crowd
Don't waste your time on Oscar-winning actresses. Just because they represent your company and are in the news right now, that's no reason not to offend them! Who cares if they turn up to an awards ceremony wearing a dress by a rival fashion house because they want you sacked? It's not like people pay any attention to someone who married Darth Vader, do they?

STEP FIVE: How to deal with office politics
Nothing cramps your style like working for other people. If you can find a way to free up your schedule for the short to long term then do it! Careers really get in the way sometimes!

STEP SIX: Handling the media
People can be dumb sometimes. Why else would Christian Dior spend a small fortune on PR just to convince them to like you? Save your bosses some money by getting to know your public, and make sure they know who the “Real You” is really like!

STEP SEVEN: Would you like fries with that?
That copy of The Big Issue just clashes with your hair, darling.

Next Week: Charlie Sheen and Colonel Gaddaffi discuss how to make friends and influence people.