Strange and bizarre jobs of the day 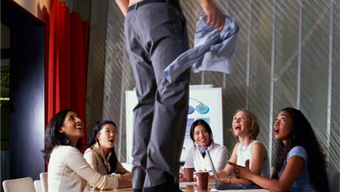 So disturbing, you'll be glad to be on the minimum wage!

Sometimes, it's fun to roam the online job sites and feel relieved you've put your '10 job applications per hour' days behind you. Not least with some of the jobs available.

Take W4MP.org, for example. Stuffed to the gills, as it often is, with cold-fish intern jobs that pay next to nothing (if you're lucky) and pretty much confirm the suspicions of those who think internships are how big banks, companies and the media get free labour and keep the plebs out, you'd be hard-pressed not to feel some despair looking at the calls for skivvies they just know will be answered, and answered soon.

Still, even the paid-for jobs don't always look appetising. Take the door-to-door support recruiter gig offered by the Howard League For Penal Reform. How does that work in practice? "Yes, would you be willing to be nice to criminals? They're such unfortunate creatures... Some of them don't even get tucked in by the guards!" You may as well turn up on the doorstep wearing a 'Hoorah for Nonces!' t-shirt, as far as most of the public is concerned.

Meanwhile, back at the smoking ruin that was once known as the Higher Education sector, the jobs market remains both weird and bleak. The Warwick University-run Jobs.ac.uk has such jobs as a research fellowship in "sustainable water management for intensive vegetable production in Senegal", which must surely get your pulse racing. Or my personal favourite, a PhD studentship to study "maritime memories: the reconfiguration of Hull and its social memory after the decline of distant-water trawling". No article is complete, of course, without mentioning "Modelling of the Fluid-Structure Interactions for Aeroelastic Characterisation of Wind Turbine Blades." I know, we're spoilt.

Sometimes, when reading these job descriptions, you realise not that there aren't too many unemployed people so much as as too many jobs that are either paid badly, too specialised or both. Still, there's always Gumtree, should you ever want to be an 'Athletic Male Model', a 'Strippagram' and/or a 'chainsaw operator'. And hey! At least it pays.