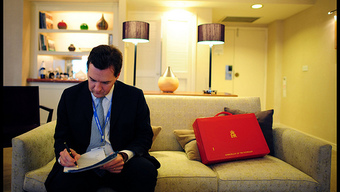 Posted on: 19 October 2010 by Gareth Hargreaves

When the government was formed as a coalition, I admit I had very little faith in its ability to focus on the malaise the nation was in, let alone formulate a plan that would offer a remedy.

Five months on it is clear that the Conservatives have a plan and hold the whip hand over their coalition allies - what’s more; they are bent on using it. Commentators are predicting 'slash and burn' cuts in the Spending Review (Oct 20 2010), which a 35-strong panel of business leaders - led by Conservative party donor Lord Wolfson - has endorsed without actually having seen it.

It is clear that changes and cuts are inevitable, though why they must be applied en masse I have not yet fathomed. Messrs Cameron and Osborne have cleverly briefed since taking office; maintaining the view that Britain is teetering on the very precipice of financial doom and paving the way for the Treasury to take a sledge hammer to the structure built up under the governments of Blair and Brown.

Common sense suggests that rather than taking the 'kill or cure' option, Osborne's recommendations should be applied over three years in line with the changing health of the economy. A recent report from Ernst and Young's ITEM club predicts modest growth for the UK - 1.4 percent in 2010 and, having factored in what is expected to be a tricky end of year, 2.2 percent in 2011.

Speaking in The Independent, Christopher Pissarides, professor of economics at LSE said "I am rather puzzled as to why big companies think the private sector will create jobs if the cuts are immediate rather than spread over two or three years, to give the private sector time to plan ahead. The situation is not so grave; there is no big risk premium of government debt as in Greece or Spain. I see a lot of confidence in the ability of the British Government to control the deficit. That confidence will remain if there is a well-arranged plan over the next few years rather than the next few months."

If Osborne's cuts are implemented immediately, the shock to the system could be too much for the brittle spirit of UK consumers and business with Pissarides fearing a Greek-style loss of confidence on the capital markets. Can we expect anyone within government to argue the case for a more moderate deployment of budgetary cuts?

Vince Cable, acclaimed as the voice of reason in the darkest days of the Brown government, is increasingly marginalised on the periphery of the coalition with little or no leverage (or will) to rein in the Treasury. Both he and deputy prime minister Nick Clegg will come under intense pressure from their own constituents and party members after the abandonment of their election pledge on tuition fees. With support for the LibDems wilting, the Business Secretary is now mocked in Tory circles as 'the man who predicted nine out the last one recessions' and 'the coalition's Captain Oates'.

We can only hope that Osborne's plan is genuine and not the result of a series of increasingly frantic compromises designed to keep the coalition together and in power whatever the cost.

I'm Not sure where you were coming from here. Firstly you do understand that this debt is not ours in the first place. That's the problem with this whole debate because the underlying assumption  is that the banks (private entities) lend money foolishly and then periodically expect everyone to prop them up.  It makes a lie of the whole free market system which left to itself would destroy to recreate. In order to understand it you will have to look into the banking system and money creation through the fractional reserve system. Osborne could separate banking activities, he will not, he could put an end to the fractional reserve system, he will not, he could stop banks from creating money through debt, he will not. What they will do, in true Neo Conservative  Disaster capitalist fashion, is to use this crisis to implement a whole series of policies  generally aimed at the poor,  to throw a few more people out of the sinking lifeboat.  So we can afford mad adventures in Libya but not to maintain hospitals in the public sector. We can maintain our commitments in Afghanistan but not maintain Schools. We can open up potential new fronts in Syria and Yemen but not Maintain council Services. We can have a a royal wedding costing £20 Million  while they shut old people homes. No, that's the real problem, the parameters of the debate were already fixed before it began and we, like the sheep we are, fail ever to venture beyond what we are told.

Sorry, this video is no longer available