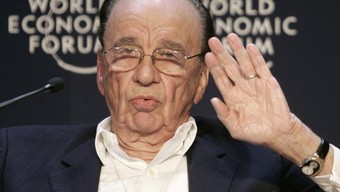 'If thine eye offends thee, pluck it out and cast it away from thee' Matthew 18:9.

In the tumult of past months, maybe News Corporation chairman/New of the World proprietor, Rupert Murdoch, consulted his bible before bringing down the axe on 168 years of journalism at the News of the World.

That the title was at the heart of investigative and popular campaign journalism, was not enough to save it when the bigger prize, Murdoch's pursuit of BskyB, was threatened.

'The Screws' was much maligned by liberals as a tits, bums and scandal rag, even though it was perfectly in tune with its audience and reflected their concerns. Indeed, some of the exposes it broke, such as the Profumo affair, Jeffrey Archer’s perjury and more recently the Pakistan cricket match-fixing scandal debunk the myth that it focused only on salacity.

It was a newspaper that had carved itself a niche and mercilessly pursued its stories. That trait led public figures, politicians and even the police to sell themselves into the loveless embrace of News International – in the often-vain hope of staving off damaging headlines.

That politicians such as Tony Blair, Gordon Brown and David Cameron have courted Rupert Murdoch is testimony to the power he has exerted over UK media since his acquisition of the News of the World - as well as their own habitual addiction to spin. That said, the clout his print publications carry, while worrying in isolation, is amplified when coupled with his planned broadcasting expansion.

With the News Corp family of companies so intertwined, any allegation of impropriety or criminality, - bribery, obscene abuse of privacy – must be considered as relevant to the proposed takeover. Furthermore, there are of course, the yet undefined role senior News International executives played in illegal acts.

The latter point is not lost on Labour, LibDem and even Conservative backbench MPs, who are determined to use Wednesday's Labour motion to block Murdoch taking a controlling stake in BskyB, the UK's largest commercial broadcaster, until all inquiries have concluded.

David Cameron's judgement is also under serious scrutiny for bringing into his inner circle the former NOTW editor, Andy Coulson, as his communications director. Cameron's desire to curry favour at News International simply mirrors the stance of his two predecessors, Messrs Blair and Brown. Each has stood idly by, ignored allegations of corruption, and failed to order an independent inquiry. Allegations of malfeasance stretch back to 2005 and are to the disgrace of three prime ministers and two Metropolitan Police commissioners that concerns went unanswered.

It is hard to believe that any other business organisation, could have survived so long under suspicion of having bribed police officers and routinely obtaining information by criminal means. But, hey! That was the power of News International.

This whole sorry tale has seen a succession of seemingly trustworthy figures dipping the heads in the trough. Serious questions must be asked about the integrity of the Metropolitan Police in view of its failure to investigate fully allegations levelled at News International. In another twist that illustrates how far reaching this scandal goes Scotland Yard's Assistant commissioner,  John Yates (who conducted the initial investigation) has made a public apology. Unfortunately, for him, the focus had already moved on from  the Met’s unwillingness to follow through the case into phone hacking and was fixed squarely on revelations of police corruption and over £100,000 that is known to have been paid to Met staff. Not only is an independent inquiry into practices at News International necessary, there must also be an independent investigation of the Metropolitan Police by another force reporting directly to the Independent Police Complaints Commission (IPCC).

It is rare for Rupert Murdoch to be found wanting, when it comes to massaging news and political manoeuvring, however charging Rebekah Brooks (nee Wade) with the internal investigation shows an unusual lack of understanding and sensitivity to how damaged perception of the News Corp brand is.

Indeed, if weekend reports are to be believed the previously fire-proof Brooks may be unable to conclude her findings as she and James Murdoch (News International chief executive) could soon themselves facing charges in the UK and US over their knowledge and involvement in phone hacking.

With the heads of the three main parties taking a safety in numbers approach to handling Murdoch - and belatedly, the prime minister questioning the merit of News International's pursuit of BskyB, it was only a matter of time before News Corp (News International's parent) beat a tactical retreat.

The suggestion that Ofcom, the Southwark-based quango, has a role to play in limiting Murdoch's influence over UK broadcast media is fantasy. The feckless media regulator has shown no stomach to protect the integrity and impartiality of UK broadcasting, instead, judging by its recent broadcast bulletin, it is busy saving viewers from the corruption of late night 'babe' phone ins. Nevertheless, it has asked that it be kept informed of police progress in the phone hacking investigation

This affair may have kicked off in dear old blighty, but it now threatens to spill into the US - with allegations that the phones of 9/11 victims may have been hacked. If these claims are investigated fully, we could see Rupert in the dock and the fall of the Murdoch's media empire.

It is all so very tabloid - with Murdoch, Coulson et al getting a taste of the medicine they have been dishing out for years. Disturbing, sensational and, like most things associated with the Dirty Digger always entertaining.

Murdoch will get Sky in the end, but it will cost him all his UK news media, including Sky News. The US situation doesn't look good either - he makes enemies far too readily, and there's now one in the White House who would be all too happy to do him in. He may also face a challenge in the News Corp boardroom. It just proves that Murdoch was never a genius or even a good businessman, but just a really good gambler. And even the best gamblers' luck runs eventually.