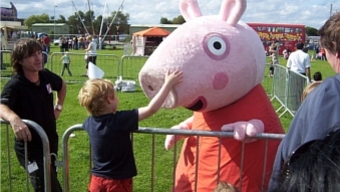 Is Postman Pat going ex pat? We seem hell-bent on neglecting our popular culture, heritage and industry, as the latest big sell-off suggests only too clearly

Alas, and alack. We may be about to lose some linchpins of children's TV!

There is trouble in Toytown: Thomas the Tank Engine, Bob the Builder and Mr Tickle may be about to leave the country. The debt-laden businesses behind some of the biggest names in childrens' TV and books are selling off some of the nation's best-loved characters.

Classic Media, the US group which already holds rights to Postman Pat and Rupert the Bear, is understood to have expressed an interest in the commercial opportunities offered by Messrs Bounce, Nosey, Lazy and Sneeze as well as Noddy's Toytown chums – all part of the Chorion group...

...Hit Entertainment, chaired by former BBC director-general Greg Dyke and taken private in 2005 by Apax Parters, has also failed to thrive under private equity ownership and is in advanced talks with US toymaker Mattell and its Japanese counterpart Tomy to sell its family of characters including Thomas the Tank Engine and Bob the Builder...

Naturally, Peppa Pig only really starts making sense via alcohol, Postman Pat's bucolic setting seems like a desperate attempt to ignore the spectre of nuclear apocalypse in the early 80s and the Mr. Men just haven't been the same since they sold out to Specsavers. Bob The Builder, meanwhile, is sinister propaganda to make the unemployed feel guilty enough to stop watching CBBC in the afternoon and go and get jobs. But still.

On a serious note, however, it's still depressing to see a large chunk of our popular culture being sold off abroad again. Britain doesn't seem to value its heritage at all - as evidenced by how we let so many tacky souvenir shops sprout up around tourist attractions, or how the government sat back and twiddled its thumbs as Cadbury's was sold off to the less than benign Kraft Foods, and German firm Siemens scooped a major contract away from Bombardier, the UK's last major train manufacturer, now facing oblivion.

It seems rooted in a cynical, almost nihilistic belief in letting the free market run amok, or a deep embarrassment in valuing anything at all. Whether it's St. Paul's Cathedral or a talking pig, we just don't seem to think it's worth protecting if money and the glib pessimism of the national character are involved.

In the end, we'll end up with nothing left to sell. Perhaps then, we'll realise that even Jess the black and white cat had a kind of value that money alone could not match.