Seabiscuit: A Story for Troubled Times 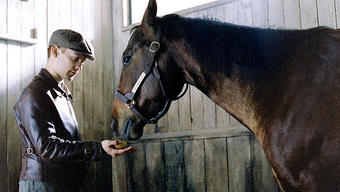 Seabiscuit, the unlikely hero for a generation of Depression-era working-class men and women, is once again receiving worldwide attention through an uplifting PBS video.

His story is one that reminds both unemployed and working men and women how to stay positive even when faced with adversity and provides surprisingly simple, but important lessons in leadership for employers and others in positions of authority who are struggling to get the American economy moving again.

Historical records tell us that, despite being a descendant of one of history's most celebrated racehorses (Man o' War), Seabiscuit was an inelegant beast. Most anyone bumping into the 'Biscuit early in his career at one shabby, out of the way racetrack or another would have mistaken him for a run of the mill horse - average, common, dull.

He was clumsy looking with an odd gait and had knees that were termed "suspicious" in his New York Times obituary. His coat, disparaged by fans and critics alike as the color of dung, never achieved the chestnut sheen we think of when we recall the magnificent beauty of Triple Crown winning horses like Secretariat. This same obituary of Seabiscuit also tells us that, in his early days, he was "an outcast - not worth the price of his hay".

Fortunately for the world, an unlikely team of men - including John "Red" Pollard, a partially blind and perpetually injured jockey - plucked the 'Biscuit from obscurity and made him into a hero for millions of Americans in the mid-1930s and early 1940s - the kind of average working class folks who were struggling with a stubbornly feeble economy much like those referred to today as "the 99 percent."

Several movies, including Shirley Temple's The Story of Seabiscuit (1949), and most recently the 2003 Oscar-nominated film, Seabiscuit, which starred Jeff Bridges, Tobey Maguire, and Chris Cooper, have attempted to convey the essence of what made this animal and his human handlers so great.

But it is the G-rated chronicle by PBS television of Seabiscuit's history that best captures the spirit of this legendary racehorse and his era. Directed by Stephen Ives and narrated by Scott Glenn (The Right Stuff) and packed with archival film clips showing Seabiscuit in action, its message is clear: Obstacles, no matter how great, can be overcome. The country will be rebound from the depression. The unemployed are not losers. Underdogs can and do finish first.

The theme of this particular television documentary is familiar to anyone who has ever had to work for a living and knows the meaning of the phrase a rough day. Showing up for one minor race after another, running himself ragged for only an outside chance at a potentially small payday, Seabiscuit loses time after time during the first two years of his career. More workhorse than a racehorse, he is frequently mistreated and races 35 times during his second year alone - far more than what is expected of other two-year-olds. He wins only nine times out of 47 for the owner and former Secretary of the Treasury, Ogden Mills.

Fate fortunately intervenes. Seabiscuit somehow manages to get his act together to lead a race from start to finish at Saratoga in 1936, capturing the attention of Tom Smith, the man who will eventually become his trainer, and Charles Howard, a man who left his lackluster life as a bicycle repairman to make a fortune as the head of Buick auto dealerships across the western United States.

Howard, a smart executive that he was, had mastered a key business idea that many of today's hiring managers seem to have forgotten - that an individual who has failed, even repeatedly, may still have his or her greatest days ahead. Howard's investment in purchasing Seabiscuit for a mere $8,000 proved to be a wise one. Seabiscuit ultimately went on to garner more than $430,000 in lifetime earnings.

More importantly, though, were the life lessons imprinted on this country's collective psyche for generations of managers and workers alike. The 'Biscuit inspired a nation - well after many other horses his age had been put out to pasture. He continues to do so in an entirely new century as America tries to right itself again from the pall of economic depression.