Scotland, the land of the free and the brave 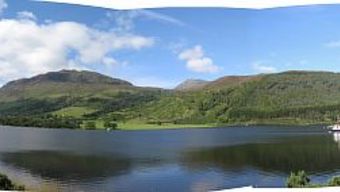 An August sojourn in bonny Scotland leaves us gob smacked by the gorgeous scenery, the true story of Nessy and hearty encounters with the locals

When we chose the 12th of August for our trip to Scotland we had no idea it was a significant date. It is in fact the Glorious Twelfth, the start of the grouse hunting season, when shooters come from all over the world to claim the humble foraging birds on the picturesque Scottish moorlands. Andrew’s brother Phillip – known as Pip to his chums – is a chef who caters for hunting parties on the estates, so his head was in a spin with preparations when I emailed to say we were arriving on that day of all days!

Nonetheless he rose gallantly to the challenge and whipped up a sumptuous supper of mackerel he’d caught himself and put us up for the night in his basement flat in the Leith docks of Edinburgh. We met his lovely new partner Suzie and caught up on his latest adventures.

Although it rained solidly all night, we were blessed with clear blue skies when we set off on the road to Inverness, taking in the pretty scenery of sensual hills carpeted in soft mauve with the sides of the road bursting with bushes of purple heather evoking strains of the Wild Mountain Thyme folk song all the way through the gorgeous countryside.

I once asked my Scottish doctor why he left his native home to settle in Australia and he answered with characteristic hardy realism “Ya canna eat scenery!”  But I beg to differ as I devoured with gusto the tasty landscape and, I confess, I chomped into some Haggis as part of the big breakfast at the roadside restaurant at sleepy Bankfoot, north of Perth (the original version, not the Aussie namesake). I figure as a dedicated traveller, you’ve got to try the local fare, at least once! This was pre-vegetarian and I look back with slight horror at my willingness to devour offal!

With me belly full of Haggis, it didn’t take long to arrive at Inverness; a short trip really, for Aussies used to driving vast distances. So rather than hang about in Inverness, we headed south to cruise along the beautiful lochs; that’s Scottish for lakes. We felt it was utterly essential to visit the famous destinations of Loch Ness and Loch Lomond.

Driving into the little village of Drumnadrochit (the name is longer than the main street), tourists are quickly whipped into a frenzy of controversy and embroiled in the fierce rivalry between the original Loch Ness Monster tribute at the historic pub and the Latest and Greatest Loch Ness Exhibition Centre. The pub swears blind the monster is for real.

The official exhibition centre takes the visitor on a scientific exploration seeking explanations for more than 1000 eye witness sightings of a massive creature living in the loch, some claim, a plesiosaurus survivor from the Ice Age. We took the tour and marveled at the documentary that uncovers the many deliberate hoaxes, the tricks of the eye caused by floating objects or shadows and the phenomenon of underwater waves unique to these lochs which are miles deep.

But if you think the monster is scary, there’s nothing as frightening as fighting your way out through the gift shop, bursting with every soft toy, squeaky toy, trinket and souvenir imaginable. You’ve got to hand it to the inventive people of Drumnadrochit and I had to sympathise with parents of little kids running the Nessy gauntlet.

Our B & B host, Lawrence, the proud owner of an exuberant English Mastiff puppy, reported that some of his fire-fighting mates investigating the ruins of Urquharts Castle came across a whole family of monsters; mum, dad and two babies Nessies. And the men had not touched a drop of Glenfiddich. Honest.

The next day we headed for that other famous Scottish destination, that sets everyone singing with the deepest melancholy, Loch Lomond. And bonny the banks are, to be sure (I say, lapsing into an Irish accent, as soon as there’s mention of melancholy!) 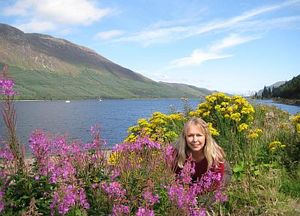 The sweeping views across the lakes to the glorious mountains are a sight to behold and it is truly amazing that these parts of so sparsely populated, so tranquil and so remote, when such a short distance from the bustling city of Glasgow. We breathed in and ate up the scenery and Andrew snapped away wildly on his trusty little digital.

We found a quaint B & B at Tarbet with beautiful décor featuring the Scottish thistle. All that sightseeing is mighty tiring so I had a wee snooze before waking up ready to search for a late night feed. It was after 9 pm when we hit the tiny township of Arrochar and found restaurants closing up and men in bars glaring at the unfamiliar interlopers. The best we could do was to find a lonely little shop and grab a serve of chips and mushy peas, which are really quite delicious and addictive! Not your regular garden peas, this mush is made from marrowfat peas and provides a hardy feast, second only to porridge!

That night, timed for the holiday season, Sky TV was screening Braveheart yet again, just to ensure the Scots and visitors remember their proud history of William Wallace, that furious freedom fighter who stood up to the pompous British in the battle of Stirling in 1297 and the battle of Falkirk in 1298. Ironically the legendary towering warrior is played by that plucky little Aussie, Mel Gibson, who strikes a maniac expression through blue war paint and is a true larrikin in throwing up his kilt.

We met Mel at a media reception in Brisbane in 1990 when he was promoting his movie Hamlet and we were publishing Big Night Out entertainment newspaper. As Mel pushed his way through a throng of hysterical, salivating female journalists he complained about being treated like a piece of meat. Perhaps he didn’t foresee the future of playing William Wallace and the grisly end meted out to him by the British aristocracy who had such a rare talent for extreme cruelty when they executed him in 1305.

Another Scottish-Aussie connection is one of the best singer-songwriters of our time, Eric Bogle who migrated to Adelaide decades ago and has an adoring following on the folk circuit. He penned the classic anti-war songs And The Band Played Waltzing Matilda and No Man’s Land and such poignant ballads as Safe In the Harbour and Leaving Nancy and the stirring Singing the Spirit Home. Australians are immensely grateful for the Scottish import of Eric!

Returning to Edinburgh on Friday we drove through the beautiful Trossachs National Park and past the famous Stirling Castle, once the home of Robert the Bruce, and arrived back in the city mid-afternoon, a round trip of 300 miles.

Not only did we choose the hunting season to visit Scotland but we also stumbled into Edinburgh in the thick of hosting the Fringe Festival and Military Tattoo, so accommodation was in verrrry short supply. We finally found a room at the inn on the outskirts of town and then hung out at the Book Festival reading intellectual articles and sipping wine in the gentle twilight.

We were waiting for our new buddy Matthew to come out of a workshop and then we were joined by his charming wife Catherine at the Del’ Orosa rooftop restaurant overlooking the city in the shadow of the imposing Castle. What a fun night of lively conversation over oysters and salmon. (I’d had my fill of mushy peas)

Edinburgh is made of stark, uniform, sandstone buildings. The Scots are known more for their utilitarian approach to architecture than indulgent aesthetics. You get the impression that the Scots are indeed hardy folk, unpretentious, tough and straight-talking, if you can unravel the brogue. Signage is very directive. You’re told to Bin Your Litter (not ‘Kindly Place Your Rubbish in the Bin. Thank you’) and passing buses remind you to Visit Your Granny! You get the feeling you’ll cop a head butt if you don’t!

Saturday afternoon we caught a street performer, Byron from Canada, who entertained the crowd with non-stop gags, fire juggling and escaping for a straight jacket and chains. The city streets were alive with music and performance and happy people enjoying a fusion of cultures.

Later that day, at the airport, as Russian tanks killed innocent people in Georgia, my Dove moisturiser was deemed a security risk and confiscated! What an insane world of bizarre contradictions!

But just as well genuine and loving relationships give meaning to life. We met up with son Daniel that night in London for dinner at Langans, Michael Caine’s superb restaurant in Piccadilly, and had some precious time with our son, talking deeply and honestly about life and all of its delights and challenges. Connections of the heart nourish the soul … even more than beautiful scenery, whisky and haggis. 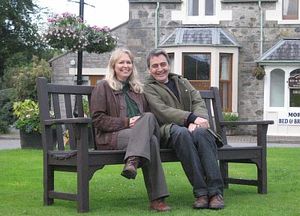