Roma and the Saga of the Sore Feet 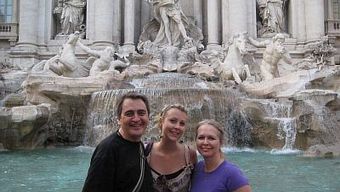 It was the summer of 2008 when our stunning daughter Justine joined us for a few days sightseeing in Rome. In contrast to her youth and beauty, it was then I realised, with a crash, I was indeed middle-aged!

The budget hotel is only four kilometers from Ciampino Airport. That’s why I chose it; so convenient, just a quick taxi ride. The surly cab driver is bustling me into the front seat and two strapping Italian men are piling into the back with Andrew. We assume we will be dropped off first but the urgent young man is engaged in a long, animated discussion with our driver in Italian and we register the words ospedale and medicos as we speed along the motorway, past industrial estates, delivering the interns to their shift at the hospital. Naturally we graciously defer.

I check with our driver that we will only be expected to pay for the short distance from the airport to the hotel. The fare should be about five Euro dollars. He smiles and nods pleasantly. Later as he unloads our bags, Andrew produces two crisp 10 dollar bills and gives the driver one. He snatches the other bill too and jumps back in the cab and zooms off, leaving us gob smacked and eating his dust.

The next morning Andrew tells his tale of woe to the sultry woman on the front desk. She is the master of positive reframing. “You are lucky, she declares. ONLY twenty dollars. ALL cab drivers at the airport are crooks and EVERYONE gets ripped off.” She shrugs and thinks stupido!

I buy a trashy magazine to fill in time waiting in the airport for Justine to emerge fresh from her exotic jaunt on the azure beaches of Malta. The Bloat Busting Diet promises I will lose 10 pound in two weeks. I notice that yoghurt features heavily for 14 days straight and being a dairy lover I reckon I can do this! YES, I tell myself resolutely, I WILL shed my excess baggage, starting NEXT week! I am exhilarated at the thought and in desperate need of a sit-down and a large serve of pasta.

As it turns out, our brief sojourn in Roma is therapeutic. I can no longer stay in denial about my weight gain. I feel like a frumpy, lumpy old cow. Actually it is all relative. It is utterly impossible to feel in any way fit to be seen in public alongside my stunningly beautiful daughter who steps off the plane radiant and sun-kissed, in the latest European fashions. Her skin-tight designer jeans accentuate her pert little buns, a fact not unnoticed by every hot-blooded Italian male within a 200 meter radius.

Instantly the group dynamic shifts. The long-legged father and daughter are striding out in front and I am straggling behind like a huffy, chubby child on the way to the Colosseum. We wander around the ancient ruins of the Roman Empire’s grandiose four-tiered amphitheatre imagining the horrific scenes of debauchery as gladiators and wild beasts fought to their gory deaths to the thrill of the 50,000 sadistic, cheering spectators.

It is astonishing that the labyrinth of underground chambers, corridors and arched passageways, constructed of zillions of handmade bricks, still remains almost 2000 years later, although the precious marble was long age stripped and relocated to churches and palaces. We go berserk snapping countless photos capturing the shapes of the eerie ruins against the late afternoon sky.

And then we are striding forth again, this time toward the famed Trevi Fountain to correct a mistake made back in 2001 when Andrew and I failed to flip coins over our shoulders simultaneously as we made a wish. This time we throw our coins at exactly the same time, which is a good sign for future marital bliss and Justine is unimpressed by the ridiculous number of photos we want to take in front of a gushing old statue crowded with agitated tourists jostling for the best coin-throwing positions.

Time to eat. We opt for artichoke pizza and beer in a café tucked away in a cobblestone alleyway with two elderly buskers pumping vigorously on piano accordions.

Frankly I’m ready to call it quits but Justine has that look of disdain that only an energetic young person can muster for pathetic worn-out parents. She drags us off to look at shops and Andrew begins to experience a mild form of torture pacing the footpath with a grim but futile grip on his credit card as we enter the expensive store.

Like many middle-aged mothers I am suffering the indignity of being totally eclipsed by my daughter’s youthful beauty. It is a tricky passage to navigate, heavy with bittersweet paradox. I am simultaneously puffed up with maternal pride while being diminished as a woman, watching my looks fade through the unsympathetic window of a fashion boutique in Rome.

I spot a natty jacket, nipped in at the waist, with gorgeous tailored panels of zany fabric. I try to convince Justine to have it then realise it is my taste, the kind of spunky little number I wore in my heyday. Here I go again, attempting to live vicariously through her and recapture my youth! I replace the jacket on the rack with a wistful sigh and encourage her to choose the latest clingy tops she likes that show off her perfect slender body.

By now my self image has hit an all-time low. Returning to the hotel on the train, Justine tries to cheer me up by suggesting a complete make-over, all the rage on British reality TV.

I definitely need a new hairstyle, sustained by ‘product’ and a focused commitment to daily styling. I need to bust out of my jeans and tee shirt rut and swan about in new frills. I must go to the gym and build muscle tone and hopefully the yoghurt diet will reduce my burgeoning thunder thighs. Like all zealous daughters she believes it is her onerous job to rescue her poor old mum from fashion disaster. But I fear I am a lost cause.

The next day we hit the Big Three; the opulence and splendour of the Vatican Museums, the Sistine Chapel and Saint Peter’s Basilica. The pre-holiday crowds have converged on the Catholic epicentre. We walk and walk and walk, awestruck throughout the resplendent museums crammed with statues of antiquity, exquisite paintings and endless corridors of ornate ceilings painted in intricate detail with ethereal scenes. The genius of western civilisation is on ostentatious display.

We shuffle with the throng into the Sistine Chapel and gaze upward at Michelangelo’s painstaking handiwork of the 16th century depicting the Book of Genesis and the Last Judgment. “No Photo! Silencio!”,  the solemn security guards boom as irrepressible rebels point and click their digitals surreptitiously at Adam’s impressive torso. 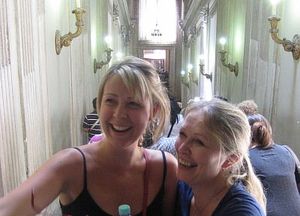 In a flash the profundity is shattered. The sign has a comical diagram of a stick figure falling down the stairs, which is confusing. Is it instructional, the novel way to take the stairs in Italy, or a warning? I dutifully stumble on the slippery steps and fall on top of a frightened child, causing her mother great alarm. Justine laughs hysterically. Not only am I a fashion disaster, I am a prize klutz.

But it seems falling on un-amused Italians is the thing to do in Rome. On the Metro the previous day Andrew had gallantly stood up to offer his seat to a tired-looking woman just as the train lurched and he lunged forward, stomping on her foot, crashing into her in a full-body tackle and falling into another confused woman’s lap while uttering profuse apologies in English as they scowled with contempt.

Saint Peter’s Basilica is an architectural feat, overwhelming in its vast magnificence of gold and marble with precious artworks adorning this most holy place. What a privilege to experience the sacred awe of the towering chambers and a quiet moment in the private chapel where I am wrapped in the comfort of redemption.

My decorum quickly wilts. Leaving the sanctity of Saint Peter’s, the searing temperature has hit 30 degrees as the lusty Mediterranean summer kicks off. If I previously felt like a cow, I have now transmogrified into another farm animal. I am sweating like a pig. (Note to self, Do pigs actually sweat?) I have been attempting to escape the sweltering heat of the Sunshine Coast since hitting menopause as I swear sweating is not a good look on any woman over 25.

So now with soggy armpits and dripping brow, I am on the verge of delirious exhaustion from hours of squinting at fascinating artworks and all the strenuous stair climbing and falling. To add to my misery, my feet are swollen and throbbing and have developed blisters. Andrew and Justine are relentless. They are pushing me onward to the Spanish Steps despite my pleas for mercy, oblivious to the agony of my ailing soles.

I hobble on, moaning and whining. It is not that I am lazy. Usually I love power walking. I am unstoppable, like Forest Gump, on an open beach. It is just that I have a wimpy aversion to pain. But for all my pleading, the cheerful, striding tourists are not hearing me. Swamped with a wave of despair, I realise I have entered an empathy-free zone.

This calls for drastic action. I throw a hissy fit and demand to call a cab and be whisked away to the nearest shady café with a cold drink. Cab-shy after his last traumatic ordeal, Andrew is dithering. I steer them to the taxi rank and pounce in the front seat ready to use my assertiveness skills on the unsuspecting driver. He takes us to Barberini. The fare is six euros. I tip him two. We exchange a steely gaze of satisfaction over the fair and equal deal. No one is injured.

By now Justine is disgusted with her mother’s sore feet and embarrassing tantrum and flounces off to look at more terrifyingly expensive shops. I glare at Andrew for quite some time. I am the Seething Sweaty Pig-Cow Menopausal Mad Woman In Rome. Andrew stares off into the distance, trembling slightly, not game to say a word. 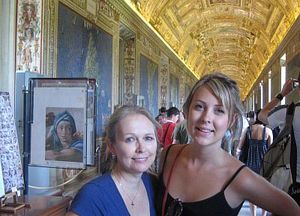