Ratting out the rats 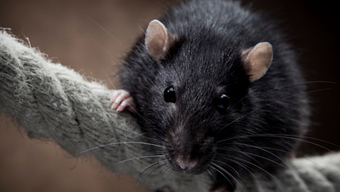 Our relationship with nature is a bit, err, 'complicated'

While taking out the rubbish today, I found myself staring at the sort of thing that makes your stomach turn. This can be a variety of things - pools of vomit, cat-dismembered pigeons, semi-conscious drunks or children running about being young. But this was far worse. Dear reader, I found myself looking at a rat trap.

It was a sinister black plastic number, big enough to hold the largest and dirtiest rodent, full of poison, and had PROPERTY OF XXXX COUNCIL stencilled on it. They had tried to hide it behind my usual wheelie bin, but the fact remained - we had rats.

Now, the problem with rats is that they haven't been gentrified yet. The many magpies and grey squirrels in our cul-de-sac haven't quite been inducted into North London civility. The urban foxes have been mugging old women too.

Nonetheless, the wildlife in our area has slowly been adjusting to life in an area where you can buy olive oil and The Observer without being beaten up.

Rats, however, live off the fag end of society - the trash, the discarded junk food, the disused, vandalised buildings and alleyways, the urban decay. They're dead common in a sort of way that makes you glad your kids don't live in their catchment area. They might even vote BNP - you know what those rats are like...

Even their official names are ominous. You can't get much more ratty than a species called Rattus rattus. In fact, that's gratuitously ratty, so ratty it'll break into your barn, eat all your corn and then have a fight outside a Wetherspoon's. That Ratty.

Or the formal English name for an even more successful, unhygienic species - the Norwegian Rat. Norway is a sinister place, home to church arson and dark, nasty violent things that live in the wood, and long winter nights without end. Norway is home to Pesta, the bringer of disease, so naturally some of her hardest-working plague carriers would come from there too.

The fact remains that no one sets up hamster traps, or lays down poison for fluffy baby seals, or sets traps for hedgehogs. They're all animals, but the point is that they're animals we like. We have a soft spot for badgers too, but the farmers insist they spread TB, and they know everything if you're willing to overlook BSE, foot-in-mouth and pesticides. You can trust their judgement.

The problem with rats, and those manky looking pigeons you get in Trafalgar Square is that they're too successful. They'll face any challenge, adapt to any environment, survive any hardship and carry on despite adversity, leaving a dreadful mess in their wake. Some might say this makes them like us, but the implications of that are too close to home for some.

Nervously, I shut the bin and scurried back to my house to wash my hands. Just in case I got Weil's Disease, or the Black Death, you understand. Whether the rat would catch anything off me, or whether the trap would do its job and capture and kill him slowly with poison was neither here nor there. I was on top of the food chain, and I wasn't for moving.

I completely agree that Our relationship with nature is a bit, err, 'complicated' and I think that the rolling log mouse trap has a great role in that. I hope the mouse's leave us alone and stay safe.

Since two years I am using colettescollagepapers.com. And I don’t remember of any disliking moment I had. But I actually loved it!

The many magpies and grey squirrels in our cul-de-sac haven't quite been inducted into North London civility. The urban foxes have been mugging old women too. | Rat Control