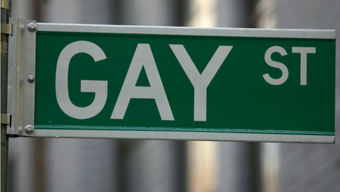 The annual gay and lesbian Pride celebration has lost its values

Pride 2011 took place last Saturday in London's West End - it was an event that I had forgotten was taking place until a man, wearing nothing but boots and furry mauve, fairy light-festooned dungarees, got onto my tube train carriage. Needless to say, he was going to Pride.

By then, the highlight of the day had already happened - civil rights activist Peter Tatchell leading the march with a banner proclaiming BNP leader Nick Griffin's bisexual past to much amusing effect. In its wake, the drinking had begun on earnest.

If dungaree man wasn't enough of an announcement that Pride was taking place, Tube entrances and exits had already been closed down at Piccadilly Circus and there were hoards of equally extravagantly dressed revellers wandering around and within Soho's square mile, where most of the serious alcohol consumption was taking place.

I wandered China Town in search of a steamed Char Sui bun, but revellers besieged all the cash machines. So I began what turned out to be a long walk through Soho, looking for an ATM but instead finding streets repurposed as makeshift first aid points, with paramedics sitting down, waiting for business to drop by.

Nearby Greek Street, was a loud, never-ending barrage of people talking loudly and a pavement strewn with empty bottles and cans, and metal barriers placed here and there for no discernible reason. As I headed towards Oxford Street (and an ATM), I glanced at one of the trailers parked in the equally drunk, loud Soho Square. Just where the tarpaulin gave way, I could see a huge pallet of beer, covered in cellophane, waiting to be sold.

And that seemed to encapsulate the real point about Pride these days. There's nothing here for those old enough to know what it was to fight for the right to be proud and open about one's sexuality. Those conspicuous by their absence were the ones who remember times when your choice of partner could land you a jail term; that lived in fear as HIV and the post-70s backlash took hold, who remember the arrival of Section 28 and the hounding of Michael Cashman by the tabloid press. In their place is a young, complacent crowd, smug with its own diluted transgressions there that day and they were going to get drunk and make other people richer. No wonder Peter Tatchell chose to go home.

The event wasn't apolitical, mind you. In fact, politics was all around, but it was of a particularly trite and shallow kind. It also centred on stickers, which adorned many of the revellers that day with uninspired statements like 'Being Gay is a Human Right' and 'I've Never Snogged A Tory'. They were wearing other people's bland truisms, in other words, when they weren't writing them on their faces with biro or wearing t-shirts with 'I like girls who kiss girls' written on them, like this was somehow a radical statement any more.

However, as I was about to leave the square, I saw a girl who had her own message scrawled on her arm. It said 'Please Don't Hate, I Am Straight'; she was in a group and blended in well, but seemed desperate to make the point. That's when I realised something. The event wasn't that diverse. There weren’t, after all, that many people from ethnic minorities (apart from a Sikh policeman looking hot and irritable), the old - as mentioned - were nowhere to be seen and no families were there either, despite the growing number of gay and lesbian couples who are having children or adopting them. For all the cod exuberance, the turnout was very homogeneous.

As I walked back to Chinatown, dodging broken bottles en route and seeing the same slogans time and again plastered over everybody, I had a further shock. Behind me was a gay couple - young, covered in stickers, hand in hand and drunk. As we entered Gerard Street, they started making loud, rude comments about how Cantonese speakers stretch and use their vowels. They were saying this loud enough for the local tradesmen and inhabitants to hear and respond to by staring at them as they passed. I hurried on, afraid to be associated with them.

I got my steamed bun in the end. Alighting at Leicester Square, I felt rather depressed by what I saw, but still... I felt impressed by those furry purple dungarees.