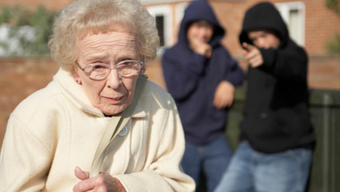 At the heart of our society lurks a violent, ugly conformity

There's a man near to where I live who is what can be labelled as 'a bit odd'. He looks funny, dresses funny, moves funny and indeed acts funny, and when he talks, which is rare, he even sounds a bit funny. A few days ago, he was seen walking down the local high street, reading a Postman Pat comic. Some whisper in a low voice that he might be "a bit 'special needs'"

Now stop for a moment and ask yourself - what would your response be if you met this man? With the benefit of sitting in front of your computer, you can be cold and clinical about it and say you would show all necessary kindness to the man, all the while feeling a bit sorry for him.

In reality, you'd be nervous around him. Perhaps you'd make snide comments the moment he walked away or giggle nervously, engaging your inner moron.

The fact remains, there's nothing actually wrong with being odd. Normal people are more than capable of atrocities, after all; normality is, in practice, how much you're like the people you want to associate with - and by that yardstick, the Waffen SS was normal and so on. More to the point, The Postman Pat Picture Paper is a great read, up there with The Economist in terms of the weeklies. What's your problem?

Well, people need people to do down and pick on. Obviously, our society likes to think of itself as civilised, but really our social contract is about what you can get away with than what you ought to do in a given situation. Apparently fearing the unusual dates back to our common ancestry with the other Great Apes, though since gorillas don't use Twitter, you'd have thought we'd grown out of it by now.

Plus, there is an unwritten rule that if you transgress the norm, you've got it coming. Many an art student has received a brutal kicking on account of their hair colour or dress sense. Yes, you may giggle, but only because you're sort of complicit in the notion that it's OK to blame the punchbag. Talk to a victim sometime. You may well end up asking yourself some hard questions.

I do rather worry for my local eccentric. Consider for a moment the sad case of Winchester's local character, Ron Purse. An odd juxtaposition of Father Jack Hackett and nomadic garden gnome, Ron was neither employable nor particularly of this world. Needless to say, art students loved him. You can see where this is going. A few years back, a gang of kids kicked and punched him to the ground for a laugh. He wasn't the same afterwards and died two or three years later. He brought it on himself, you see. Look what he made them do.

Now, coincidence upon coincidence, the eccentric and I share a local watering hole. (It's cheap.) Right now it's bedecked with bunting and there's a certain frisson in the air, what with the royal wedding tomorrow. I'll be ignoring it, but strange things are happening. Or rather, 'normal' things. People are suddenly beginning to like the Monarchy, watch documentaries and avidly read about rich people they'll never personally know. Support for the status quo is up. Millions will tune in tomorrow to watch an abstract ritual. Everyone suddenly cares about Kate Middleton's dress.

The need to conform is all around. Not 'fitting in' is seen as an affront. Try going into a pub tomorrow and loudly telling everyone it's all nonsense. Bad things will happen, especially if there's been a fair bit of drinking. So I worry for my local eccentric. One night he might break an unwritten rule and someone will teach him a lesson. For reading Postman Pat and being harmlessly strange. There's something depressingly normal about violence.

This is such a great resource that you are providing and you give it away for free. I love seeing blog that understand the value of providing a quality resource for free. 먹튀검증커뮤니티

Thanks for sharing this information. I really like your blog post very much. You have really shared a informative and interesting blog post with people.. 먹튀검증업체

Wow, this is really interesting reading. I am glad I found this and got to read it. Great job on this content. I like it. The Gentleman Merchandise

pleasant post, stay aware of this fascinating work. It truly regards realize that this subject is being secured likewise on this site so cheers for setting aside time to talk about this! www.signinsupport.net

I really impressed after read this because of some quality work and informative thoughts . I just wanna say thanks for the writer and wish you all the best for coming!. 꽁머니

Positive site, where did u come up with the information on this posting?I have read a few of the articles on your website now, and I really like your style. Thanks a million and please keep up the effective work. walmart paystub

Extremely helpful post. This is my first time i visit here. I discovered such a large number of intriguing stuff in your blog particularly its exchange. Truly its extraordinary article. Keep it up. seo agentur

I truly welcome this superb post that you have accommodated us. I guarantee this would be valuable for the vast majority of the general population. Onewheel

I found so many interesting stuff in your blog especially its discussion. Really its great article. Keep it up. rigid flex PCB

Pool Perfection, Every Time Contact us today for a free estimate for your pool repair, remodeling, or new construction needs both residential and commercial. quartz pool finish

Faux leather or can be named Synthetic leather or Imitation leather or Artificial leather, There are 3 primary types of faux leather fabrics Faux Leather ViewPoint, Please visit our website to get the best & honest information for all kind of leathers. faux leather

I needed to thank you for this phenomenal read!! I unquestionably adored each and every piece of it. I have you bookmarked your site to look at the new stuff you post. Ottawa Rims

Thanks for Nice and Informative Post. This article is really contains lot more information about This Topic. Onewheel

Regular visits listed here are the easiest method to appreciate your energy, which is why why I am going to the website everyday, searching for new, interesting info. Many, thank you Computer Support and Services near me Rancho Park Los Angeles