Onwards, into the valley of death they rode! 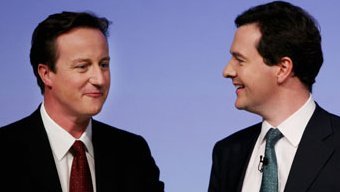 Bankia rescued by government of Spain as Eurozone countries flirt with disaster once again.

This week, we had the Queen's Speech and a very good, if rather dull, legislative programme for 2012/13. After all the bad press the Coalition has had over the past couple of months, this lull was very, very welcome to at least two residents of Downing Street.

It has to be said, many of the negative headlines the coalition has received were the result of poor ministerial judgement, but more were allowed to fester because the Prime Minister had not replaced his director of communications, Andy Coulson, with a new ‘spin doctor’. These unpopular creatures may get very bad press themselves, but they do serve good functions for any incumbent government.

I imagine that at the prospect of facing the media with a new press appointment, Cameron prefers to muddle through with what he’s got! Sooner or later, he will have to get someone in to handle the issues that are on the horizon – because his ministers are certainly not up to it.

The Eurozone crisis will trundle along in the background, but pensions and striking government employees will dominate Whitehall thinking and then, of course, we still have the economy to contend with. Don't be surprised to see inflation rise again and a spike in unemployment figures before the year is out.

The next six months will define Cameron's leadership and the Coalition. He has public dissent to placate and turn around and on top of this he has the extreme right of the Tory party to keep happy.

Spain is in a right pickle and we still have the basket cases of Greece and Portugal and even this morning Italy is looking wobbly again. All of their woes go to affect the rate at which they borrow money and in Greece’s case (if they could find anyone to lend to them that is!) they would have to pay 24% compared with the current rate of 1.9% for the UK. The only reason we are so low is the world markets think we are a safe bet because we’re really handling the problems we have – even though it’s hurting. We’re facing and handling the inevitable – balancing the books.

The Spanish government has had to nationalise, Bankia, one of their biggest banks because of the poor quality of their lending portfolio in the property market. Spanish commercial and residential property are rock bottom at present and likely to stay this way for years to come – they have over 600,000 homes for sale that no one wants! This combined with unemployment of 25% means they have problem that cast ours into the shadows. The only country doing well in Europe is Germany - they are booming compared to the rest of the Eurozone. With the Euro falling they will do even better when the converse will happen to us.

Cameron’s task now is simple – find the magic bullet that will get the economy going again and create genuine employment and this isn’t silly training schemes that don’t work and waste taxpayers money. Government departments don’t create jobs – businesses do that and the money should go to subsidise job creation. The Treasury should give big tax breaks for exports – no Corporation Tax on profits from exports – this would get our company directors on the planes abroad. Build social housing – God we need it bad enough.

Whatever he does it should not include spending money on more civil servants – we can’t afford the ones we’ve got. It’s time for thinking outside the box otherwise they will be putting Cameron’s Premiership in one later this year. Innovative action now is what is needed – and a new spin doctor!

If you want to share your views, you can email me via my profile or at tony@olderiswiser.com. Better still; just leave your comments below where everyone else can join in the debate.