Nick Clegg, defender of the NHS? What the press say 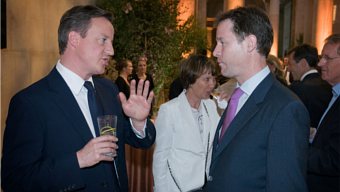 The Deputy PM once again fails to impress

Your party is in retreat, no one likes you and your cosying to Prime Minister David Cameron is making you something of a liability. What to do? If you're Nick Clegg, it's time to rebrand yourself as something of a rebel.

And what better way to start than by publicly denouncing the government's NHS reform plans? As the BBC reports, this is at least superficially a clever move as it contradicts what your boss (David Cameron, as opposed to the electorate) has said about the plans.

Tellingly, though, The Telegraph reveals that Clegg made his announcement last night in front of an audience of Lib Dem MPs and Peers, and his main opponent will not be the PM, but Health Secretary Andrew Lansley. You may draw your own conclusions at this point.

More revealingly, The Independent has news that Labour is hoping to form local alliances with Lib Dem councillors in an attempt to undermine the Coalition at grassroots level. Clegg may well have to shore up his support, with the NHS being a mere fig leaf.

It may be of little import in any case, for as the Daily Mail reports, the standard of living is in free-fall and inflation is on the up. Voters have other concerns than Clegg trying to re-brand himself as a man of conviction.

Simon Hoggart at The Guardian goes so far as to emphasise how isolated Clegg really is. Many Tories and Labour MPs hate him and both for the same reasons - he keeps the former in power. Increasingly he is becoming a figure of ridicule.

And as Sky News' Adam Boulton argues, the controversial Health Bill will be in deadlock anyway until November, with some inevitable parliamentary Ping Pong to ensue straight after. It seems Clegg picked an easy issue to stand against. After all, he's hardly going to risk his position, is he?

Not when the Lib Dems face annihilation in the polls. According to the latest results at UK Polling Report, they would only get 9% of the vote if a general election happened tomorrow, leaving them with only 9 seats.

The gesture may also be an attempt to distract from another Lib Dem 'problem', namely the beseiged Chris Huhne, whose problems with the Law risk reminding what's left of the Lib Dems' electoral support that they're just another bunch of politicians.

Guido Fawkes says the incriminating evidence of a speeding offence is mounting, while nasty rumours abound that his party both colluded in a ruse to conceal it, and are now tossing him to the wolves...