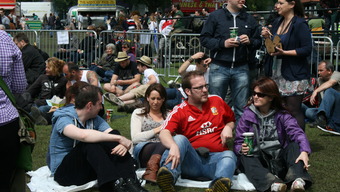 I was all excited about seeing Bob Dylan, the folk music icon of my youth, but I wimped out.

I’m not the hardy festival goer I once was. A drop of rain (in summer) and I’m cranky and ready to head home.

I came here to see the legendary Bob Dylan in the flesh but even the music icon (and bragging rights) can’t quell the urge to flee for the comfort of my sofa. Granted I’m all snuffly and prone to dropping my bundle when poorly.

The London Feis at Finsbury Park is a moderate-sized festival; just a few thousand, unlike the Woodford Folk Festival near my former home in Queensland Australia, which attracts 120,000 diehards willing to swelter in stifling humidity and wade through mud from torrential downpours so fierce they can soak through sturdy marques.

The Feis has three simple venues; the Main Stage, the Tent and the Third stage and standing rooming only on soggy grass. No seating for the likes of me who has come without a picnic rug, portable mini chair or piece of plastic, just today’s Guardian. 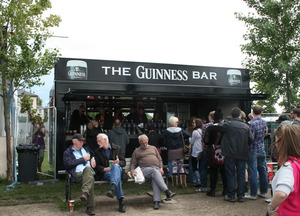 An array of food stalls encircle the main stage. The Guinness bar has a queue half a mile long of dedicated drinkers willing to wait an age for a pint of the black ale. I am glad I prefer to swig on water.

This is the 21st Feis, a weekend Irish music festival in north London, and it is turning on an impressive line-up of famous names. Bob Dylan, Christy Moore, and The Cranberries on Saturday and Van Morrison, Clannad and Hothouse Flowers on Sunday, amongst many other brilliant performers.

However the reality for me is not so glamorous. I sit on the damp ground propped against the wire fence reading my newspaper and listening the strains of an Irish reel from the tent. It is no fun coming to a festival on my own. My husband couldn’t be enticed to join me. It’s a running battle we’ve had for years ever since my folkie 20s.

Another sporadic shower forces me to pull my hood up and weave through the crowd to find some shelter.

I am checking my watch every ten minutes. Bob isn’t on until after 9 pm. It is now 4pm. I’m in for a long wait. And I just found out that photos of Dylan are not allowed from the press pit!

The event is well organised and the line-up of acts superb. The crowd is thoroughly enjoying the music, despite the drizzle.

But I am weighing up the prospect of five hours of standing around on my own with a mean head cold. Can I handle the disbelief of my old folkie pals in being so close to seeing the 70-year-old Bob Dylan and pathetically wimping out?

I wimp out and head for the Tube, deciding that from now on I will take my entertainment indoors.

Had a wonderful evening out at Music in Beddington Park (put on by the Rotary Club).  The tribute band sang 'Queen' songs in the first half.  The second half was the Royal Philharmonic Orchestra with our friend, Emma Stevens, soprano, singing the favourites.  Took camping chairs and picnics with loads of friends (and children).  Fantastic fireworks to conclude.  What a marvellous evening out. I love seeing people from 2 years to 80+ dancing and singing together and having a ball.

Sounds like a wonderful event with all the right ingredients: being well prepared with chairs and food and plenty of good friends of all ages and of course a great line-up of entertainment! Glad your outdoor event was a success. I hope next time I will learn from my experience and do it differently! thanks for your comments!

I love festivals but unfortunately my husband doesn't feel the same way about them.  The whole idea of reliving some lost part of my youth is so enticing.  The only problem now is my eldest son is fast approaching an age where he may start wanting to go to festivals - the big dilemma now is whether I gracefully accept my time is over or become an embarrassment for my 'cool' teenager son?????

Big dilemma! It is possible to embarrass a teenager without even trying just by existing! I'd say let your son go to festivals with his mates and find other festivals to go to with your friends!

The big mistake I made was going on my own (no fun being in a crowd and all on my ownsome with no-one to chat to!)
I am going to take a leaf out of Judith's book and go to outdoor concerts that suit my current tastes! I've heard about concerts at Kenwood House, Hampstead Heath with performers like Tom Jones that are more civilised than rock concerts! And I'll be taking the picnic hamper and all the creature comforts next time! My days of wallowing in the mud (re this year's Glastonbury) are over!