Luis Suarez: Punish the crime, not the man 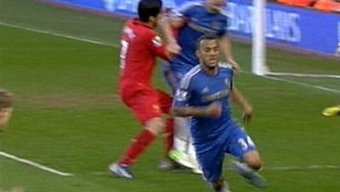 Offence serious enough to require a 10 game ban but insignificant enough to be ignored by the police.

Premier League panto villain Luiz Suarez has again had the tabloids whipping up hysteria this week after being charged and banned for 10 games by the FA for biting Branislav Ivanovich.

It is clear Suarez has made some powerful enemies in the UK, how else could you explain the disparity between the sanctions imposed on Suarez and the then England captain John Terry, who was also proven to have racially abused an opposition player.

Much is made of the example set by senior professionals and their influence on youngsters watching the game, so it was disappointing that the Football Association did not take a similarly hard line with Terry. You really have to question the suitability of a body that has concurrent cases of racist abuse - one fully corroborated by TV evidence - and imposes such widely different sanctions (eight and four games respectively). If the Football Association had any serious interest in the 'Kick it Out' initiative they would have made examples of both.

So, far from being the watershed season in the fight to stamp out racism in football, it petered out into a season of acrimony, discontent and anger at the wrongheadedness of the administrators at the FA. It is also worth noting the chief magistrate in the Terry case, Howard Riddle, rehabilitated the following phrase: f***ing black c**t, effectively signalling it as an acceptable expression when communicating with someone with a different skin colour.

It was argued during the Suarez case that the terms he used were semantically vague, as in Uruguayan the meaning was different. This is not a view I share. Suarez knew what he was saying and he received an appropriate ban. Unfortunately, this is where the glassy-eyed arbiters of our game get themselves in a muddle again. While all the talk has been of looking at the incident in isolation, it is clear that the feeling Suarez has 'previous' has played a major part in the severity of his punishment.

Biting on a football field is absurd; it is violent conduct and if seen should be punishable with a straight red card. If dealt with retrospectively, then the punishment should be the same. It is very difficult to have faith in the integrity of a legislative body that opens one can of worms but closes many others.

There does not appear to be any consistency in the way penalties for disciplinary offences are arrived at. The disciplinary panel failed to take any retrospective action for Sergio Aguero's ugly two-footed stamp into the ribs of Chelsea's David Luis in the FA Cup semi final at Wembley or for Callum McManaman's knee-high tackle on Massadio Haidara among several others. It seems the FA waited to see which way the wind was blowing in the tabloids before showing their hand.

The end result of this, whether Suarez successfully appeals his ban or not, is that the FA views violent conduct more seriously than it does racism on the football pitch.