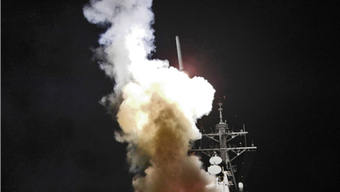 The conflict approaches quagmire as rebels falter and Obama juggles

As the civil war (what other name is there for it?) carries on, with NATO and allies still launching nightly sorties, what is the present situation in Libya?

Not good if you're the rebels, according to the BBC. Despite air support, their disorganised and randomly equipped forces have been driven back from Ra's Lanuf and may be about to lose Brega.

There's some debate at The Guardian over whether President Obama was right to say that arming the rebels would be legal. There is dissent at the UN, and legal experts in the UK are also querying its legality.

Over at the Daily Mail, much ink is spilt not on whether the rebels can hold out, but on Colonel Gadaffi's glamorous daughter Aisha, who's been sent to the front lines to rally loyalist troops, proving that 'sleb culture' now extends its tentacles everywhere.

The Independent follows with more details on the rebels' retreat from Sirte, but at least the Libyan air force has been eliminated.

Elsewhere, Al Jazeera reports the rebels are complaining - somewhat ungratefully - about the lack of air support (even though their lack of organisation isn't exactly helping), as they retreat to areas protected by NATO patrols.

And finally, The Economist has an analysis of what's being called the 'Obama Doctrine', a rather lawyerly and complicated take on the Libyan situation that has the advantage of allowing the POTUS to have his cake and eat it regardless of how things turn out.