Libya - Gadaffi out; snouts in 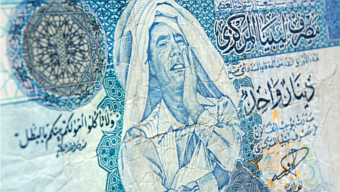 Our recent history with Libya is a disgrace, and now a growing embarrassment

There is no surer sign of corruption than incompetence. After all, when it's revealed the only UK oil company to be given exclusive trading rights with the victorious Libyan National Transitional Council just so happens to be one that contributed to the Conservative Party, and has a Junior Minister as an ex-employee and ongoing chum, you don't really have to spend too much time joining the dots.

Still, as Alan Duncan and his former colleagues at Vitol celebrate the good news in Libya (and Gadaffi's overthrow is good news), it's worth remembering that Britain has always had unpalatable links to the ancien regime when it still ran Tripoli.

Take all that once-frozen Libyan money the RAF flew back this week. In a sense, all that lucre had come full circle as it had been originally printed in the UK, with Gadaffi's portrait and all. All this despite Libya's appalling human rights record and its involvement in several terrorist atrocities and criminal acts, including Lockerbioe and the 1984 murder of WPC Yvonne Fletcher.

Speaking of Lockerbie, the release of bomber Abdelbaset Ali al Megrahi so he could die at home has lead to one of the longest deaths in history, his release occurring at around the same time as Peter Mandelson holidayed with Gadaffi's son, Saif, and BP winning a £500 million contract. Of course, these events were completely unrelated.

This also coincided with one of many visits to Libya by the former Prime Minister Tony Blair, who apparently only dislikes Arab dictators called Saddam. Blair famously shook hands with Gaddafi in 2007, 'rehabilitating' the dictator even while his government continued to imprison and torture dissidents.

The irony is that Britain won't even be the main winner in bombing the nation it had until recently tried to woo. In terms of contributions to the bombing campaign, the UK only provided as much air power as Canada, Norway and Italy, while France took on almost a third of the enterprise.

It is Sarkozy, then, and not Cameron, who is claiming joint victory with the NTC, leaving Britain with only token influence after all that abasement, toadying and betrayal.

But then, who's winning and who's losing is less about how much effort was put in and more about how much you get out. Britain made the mistake of backing a loser.