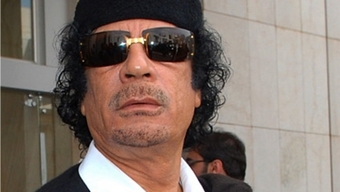 As Libya's civil strife nears its climax, the media reports.

As Muammar Abu Minyar al-Gaddafi, and there are many ways you're supposed to spell his name, vows to rather die a martyr than leave Libya - a goal many protesters there may well wish to help him out with - what are the media saying about the ongoing Libyan crisis?

Starting at The Guardian, Brian Whitaker ponders whether Gaddafi has some method to his madness, as the streets of Tripoli reel from air-raids and attacks by mercenary militias.

The Telegraph reports that the death toll so far is grim, with more than 1000 dead already. Ominously, it also has video footage of mass graves being dug outside the capital.

But as The Independent says, this seems not to be fazing the protesters, who vow to continue despite the great danger they face. Robert Fisk meanwhile argues that for all Gadaffi's rhetoric (and there is rather a lot of it), he may no longer be in control of the situation.

Elsewhere, the Daily Mail fears civil war may be about to break out, as petrol prices rise significantly as a result of the Libyan oil industry being disrupted,

The BBC reports that, in any case, Gadaffi has lost control of Eastern Libya, as he looks ever more isolated, both abroad and at home.

Indeed, Al-Jazeera says that even more towns and cities have rejected the regime's rule, and is one of the few outlets willing to discuss Libya's complex tribal systems and what effect they may have on the protests and their resolution.

Haaretz, meanwhile, features claims that Gadaffi ordered the sabotage of oil pipelines in his country, which probably isn't a good idea with the Americans watching, not least with the once-friendly Arab League now severing its ties.

Finally, the US media has the New York Post printing claims that Gadaffi did indeed order the Lockerbie Bombings, while Slate muses on how President Obama could use these tumultuous events to his advantage.

Funny how things turn out. The funniest thing I found was the report that the rebels, or whatever they call themselves hsave instituted a central bank. That's funny really but of course necessary because how else  the these 'Our Sons of Bitches' get themselves into debt with the west without one. That's the point Gadaffi was out of our control, NOT politically, Blair and the EU Gang saw to that,  but FINANCIALLY. HE UNLIKE most of the rest of the world was not in debt to the global financial system or in need of American protection therefore HE COULD NOT BE RELIED ON NOT TO SELL HIS OIL IN THE GROUND TO THE CHINESE!  HE WAS DOING DEALS WITH THE CHINESE. Now the rebels say that because China didn't support the United nations 1973 they won't be honouring contracts with them

What are they thinking? They're thinking that it's running out. It's running out... and ninety percent of what's left is in the Middle East. This is a fight to the death.

Some trust fund prosecutor, got off-message at Yale thinks he's gonna run this up the flagpole? Make a name for himself? Maybe get elected some two-bit congressman from nowhere, with the result that Russia or China can suddenly start having, at our expense, all the advantages we enjoy here? No, I tell you. No, sir! Corruption charges! Corruption? Corruption is government intrusion into market efficiencies in the form of regulations. That's Milton Friedman. He got a goddamn Nobel Prize. We have laws against it precisely so we can get away with it. Corruption is our protection. Corruption keeps us safe and warm. Corruption is why you and I are prancing around in here instead of fighting over scraps of meat out in the streets. Corruption is why we win.