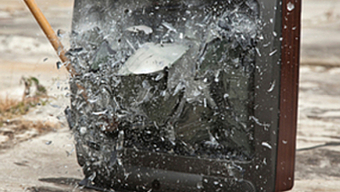 To judge by some of the hype and post-partum frothing, last night's Doctor Who episode ("The Impossible Astronaut') was a combination of first kiss, the Second Coming, a three hour firework display and an infinite number of monkeys inadvertently typing out King Lear.

But it was none of these things. At best it was sort of OK, but at worst, it represented everything that is wrong with Nu Who.

Take the desperate urge to be popular. How else to explain the expensive (and completely superfluous) location shots of a Utah desert, the American setting of the episode and even the use of the word 'gasoline' instead of 'petrol'?

It marks a desperate attempt by the show to sell the show even more to a US audience, which rather failed the last time they tried it - the 1995 Doctor Who TV movie with Paul McGann - and also misses out the fact that American fans like the show for what it is (a very British take on sci-fi) rather than what it's trying to be.

But then Nu Who is more a faint pastiche of latter-day US 'cult' TV shows in all their schmaltzy 'glory', starting with Buffy The Vampire Slayer, and so tries to invoke their rather bleak scenery-chewing soap opera pessimism alongside their series-long story arcs, which are just a cynical way of stretching out six episodes' worth of ideas over 21 episodes.

It has very little to do with the original show, which is often relied upon to give Nu Who its gravitas, but is otherwise treated like an embarrassing old fuddy-duddy relative you invite over for tea once in a while but otherwise ignore. It's Who in name only, choosing whizz-bangs, mugging to the camera, dramatic music and mass media hype over the original show's more nuanced, patient and occasionally more grown up approach.

The end result is just an excuse for yet another series-long story arc, complete with 'show runner' Steven Moffat trying desperately to prove how clever he is with yet more convoluted gimmicks in place of actual storytelling.

The show always promises and indeed spends most of its time promising, but then seldom delivers. And after the events of tonight's episode, you know that old chestnut - the 'reset button' - is going to get pressed and it will all be made better anyway.

The show is also rather sexist. Gorgeous pouting etc. companion Amy Pond [Karen Gillan] has shifted from hysterical loony to screaming idiot, while Moffat's Mary Sue, River Song [Alex Kingston], simultaneously suggests he'd rather write fan fiction about her than that boring main protagonist in his blue box, and also thinks it's perfectly acceptable in 2011 to slap men about. After all, women hitting men is funny, innit?

It doesn't seem too far removed from the clunky days of late 60s Doctor Who where the women were primarily there to scream, make tea, be idiots or end up as weirdo bluestockings.

The aliens, also known as The Silence, aren't that scary either, not least because we already knew what they look like due to all that media hype, but also because they don't due much except kill people with special effects and make you forget about them whenever you look away. Which is an apt metaphor for how forgettable they really are.

Still, the episode is well shot and directed, and effectively paced. Matt Smith really is now The Doctor and plays him with consummate mastery. Last series' man of the match, Arthur Darvill, who plays Amy's put-upon husband Rory, remains impressive in an understated sort of way and has more depth than his 'wife' or River Song put together. So naturally, they don't give him much to do in this episode.

Ultimately, then, for all the huge plot twists, epic events and overdone visuals, it's hard not to be left with the feeling that everything within is inconsequential.

And as for the tribute to Elisabeth 'Sarah Jane' Sladen? It was shown afterwards on an obscure BBC digital channel. Nicholas Courtney didn't even get a mention. It seems The Silence aren't the only ones who are instantly forgotten.