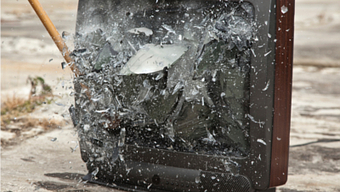 Last night's television wasn't necessarily a cheerful state of affairs, but it was revealing in more ways than one.

First up was Dispatches: Secret NHS Diaries, the sort of documentary bracketed under 'harrowing' and 'ring this number if you have been effected by the issues...'. Featuring secretly and openly filmed footage of elderly patients trying and usually failing to get the palliative care they deserve and pay for, it was necessarily but unrelentingly grim up to and including the death of a father and then his son within the space of 24 hours, and an emaciated man choosing to stay at home just to die.

The indifferent and callous staff, not to mention the lumbering slug that is the NHS bureaucracy at its most mindlessly opaque was brought into stark relief, with nothing but PR spin from the NHS trusts involved and a happy ending (relatively speaking) only when one patient finally got the place in residential care she needed for a peaceful death.

Suffice to say, it was bleak viewing, the only problem being that by focussing on the worst examples, the documentary could be charged with both sensationalism and playing into the hands of those who would do away with the NHS altogether.

Those looking for more cheer after that could have looked no further than BBC4's The Story of Variety, as hosted by Michael Grade. This documentary covered the glory days of the variety show, a somewhat gentrified (albeit barely) spin on music hall, which once wowed the crowds before television, rock 'n roll, ill-advised naked revues and its own short-sightedness consigned it and many of its stars to the scrapheap. (In one case, Archie Glenn, a comedian with a 40 year career, ended up as a car-park attendant.)

Grade, unlikeable as he is, is ostensibly a good choice to host the show, since he started out as an agent for these often baffling acts (performing collies and 'guess how old the bull is' being typical examples), and seems to get a lot of good stuff out of his interviewees. There's an impressive range of them too, like Bruce Forsyth who literally slummed it in a mobile caravan, Val Doonican, Ken Dodd, Maurice Sellar (one of Max Millar's multitudinous booze donors), Barry Cryer and production manager Donald Auty. (Whose insights are showstealers.)

Despite the soft lighting and sentimentality, the show is at its best when it exposes the desolation of lives spent forever on the road, with everyone congregating for some reason at Crewe Station, while the black humour of crazed landladies (who would occasionally double up as groupies) probably deserves a documentary all of its own. Peel away the gloss and the darkness is almost overpowering, and yet reflected on with some nostalgia and not a little relief of its passing by those who lived the life.