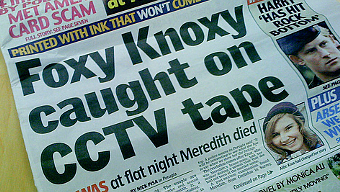 Brutal murder all but forgotten as ABC News provides lingering close-up shots of an acquitted suspect, ignoring the victim's family in the process

A convicted murderer was acquitted in Italy yesterday after it was proved she was white, pretty, rich and American.

As her supporters wept and embraced one another, the Judge concluded that she only got sent to prison in the first place because she wasn't a blonde, but might have been in real trouble if she had been accused of killing one.

The white, rich, American sex kitten was ably assisted by a not-at-all biased US news media, which danced naked around an effigy of her every night and spent every day saying how appalling it was that a rich, white young woman that all the male reporters secretly fancied was found guilty of anything. The American public also stood firm behind her, confident that she would not be proven to be black, poor or sexually unattractive.

The pretty rich American girl was originally convicted on the basis of a huge amount of evidence, but her appeal successfully defended her on the grounds that the local police were video-taped picking their noises and scratching themselves while casually tossing key evidence into a used shopping bag, and secondly that her Daddy is very, very rich.

Her Italian co-defendant was also acquitted after new evidence emerged that he was from a wealthy family and so incapable of doing anything wrong. The Borgias were unavailable for comment, though the Judge noted that he might have upheld the sentence if the defendant hadn't proved beyond reasonable doubt that his Dad owned his own swimming pool.

As his gorgeous, pouting etc. daughter pulled out an onion and looked constipated, her rich daddy said: "A great injustice has been corrected this day! Never let it be said that money can't buy anything or that privilege and an over-inflated sense of entitlement can't prevail. Anyway, we're going to celebrate my daughter's 21st birthday even though she's 24 and not even mention the family of the dead girl because they're not as rich as me."

Meredith Kercher would have been 26 in December.