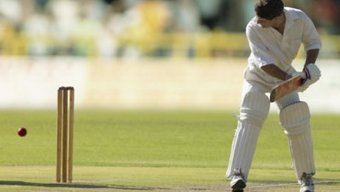 Is Stuart Broad a barefaced cheat or an opportunist who took advantage of his opponents’ lack of nous with DRS?

Shock horror, a professional sportsman has used unsportsmanlike behaviour to gain an advantage in an important match. Why are we not surprised? It happens in rugby, it happens in football, it even happens in golf – just ask Sergio Garcia. But this is cricket, the gentleman’s game.
It seems that having shaken off our Ashes whipping boy tag, we are happy to excuse any indiscretion just so long as we keep winning and having endured many years being ridiculed as the ‘whinging Poms’, we can now revel in the discomfort of the Australia cricket team, Australian tourists, Cricket Australia and even their Twitter account administrators. How the worm has turned.
So, for me, it’s been a novel experience to hear the tourists’ protestations and howls of indignation at Broad. Especially amusing for anyone who remembers that Aussie stalwart Mark Waugh was prepared to do exactly the same (versus West Indies in the days before DRS) after clearly playing an Ian Bishop delivery.
It has been a heady couple of years for British sport; a brilliant Olympics, back to back Tour de France successes for Bradley Wiggins and Chris Froome, an Ashes win Down Under, a Lions Tour win again on Antipodean soil and a British man as Wimbledon champion for the first time in more than half a century. Oh, happy days.
So, what of ‘Broad the Fraud’? Is this really anything out of the ordinary? If a governing body and the two contesting teams have an agreed formula for review, then the batsman, in this case Broad, is entitled to stand his ground. Nothing in the rules compels him to do the honourable thing and kick off the bails.
‘But this is cricket,’ I hear you say. That’s true, but it is professional sport and a hugely competitive one at that. I do not think England captain Alastair Cook or the partisan Trent Bridge crowd would have appreciated his honesty if it meant giving the tourists a head start in the series. In similar circumstances, would the Aussies do the same? You bet your life they would.