Inflation in the nation 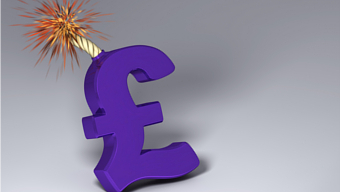 We grow poorer by the day

And that is the important thing to remember. The money in your account or pocket is, this very second, depreciating in value - even as you read this.

But inflation is variable. Sometimes it travels at a slothful speed that would shame a slug, other times it gallops forth and in doing so, actually makes us poorer.

You see, wages and salaries rarely keep pace with inflation. Bosses aren't stupid (ruthless, craven and shameless maybe, but not stupid) and know they can, for a while, actually save money by paying exactly the same money over time.

So it is that the more inflation jumps up, the longer they can put off putting up pay to match the new circumstances our wallets find themselves in.

Such a quandary faces many people in the UK at this time. The annual growth of earnings has actually fallen in the past year, from 2.3 to 2.0 percent, while inflation has gone up by 4.3%. We've had a paycut but we're too innumerate to have noticed.

So it is with joy that one can report that utility bills are up so high, they'll probably push inflation up to and perhaps over the magic 5% mark. Yes, we'll all have had a 3% pay cut by the end of this year, and all from companies that are greedy, incompetent and even found guilty of being, well, a tad dodgy.

It's our fault, of course. We let it happen because we think money is a stable and concrete thing, when in fact it is abstract and unstable. Value is both elastic and a false friend. Still, declining living standards aren't too much of a problem - are they?