If you try flogging the woods today... 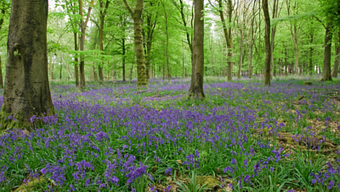 ...You're sure of a big surprise (if you're David Cameron).

Let's hear it for people power, and a belated realisation that selling the family silver is no way to run a country. After the government launched a consultation over whether it should sell off much of our state-owned forests, it discovered - much to its horror - that the public don't much approve of their woodland being sold off to the sort of people who like shooting grouse, and wouldn't mind bagging some ramblers too were it not for the right to roam. The big winner of a sell-off, paradoxically, would be the lumbering ground sloth that is the Forestry Commission, that somehow grows in size every time the area of woodland there is to administer shrinks.

So, wisely, the government has relented, at least demonstrating a degree of political savvy that the New Labour years sorely lacked. Blair would have course have proceeded regardless as 'a man of principle' despite the public uproar. Brown, meanwhile, would have scowled and pursued the policy with monomaniacal zeal. David Cameron, however, knows when to chicken out, but plainly lacks any principles or understanding of how much nature and the land matters to the people of the UK.

So, a victory then for those well-organised, effective public campaigns. This has implications for policy - the government is vulnerable to public pressure, and it has pretty much conceded the point this morning. It also has a salutary lesson for us as both an electorate and a public. Just bleating about the way things are going is not enough. We need to take a cue from the Egyptians and actually stand up and do something. It may be the only way the government ever listens.

It has certainly upset those part of the media who rather fear the public. Everyone's favourite Tea Party apologist, Paul 'Guido Fawkes' Staines, whines that 'only 0.7%' of the population signed the petition. He seems not to remember that firstly, this is still over 420,000 people, and secondly, the Conservatives themselves only got 36.1% of the vote in 2010, but now find themselves in government with the Lib Dems, who only got 23%. Sometimes the path of democracy seldom runs smooth. Meanwhile, Mike Avery at the Guardian somewhat dismisses the protesters as "exactly the kind of people who will often stand four-square behind Conservative governments". They're missing the point somehow.

Still, let's not forget that today is a great victory for the public and our heritage. If nothing else is left standing after the recession and cuts, at least we'll still have our trees.